To work out how many of each type of gem each jeweller had, Fai from Bangkok Patana School used a diagram like this one, and this explanation (where $r, s , p, d$ represent the values of 1 ruby, 1 sapphire, 1 pearl and 1 diamond respectively): 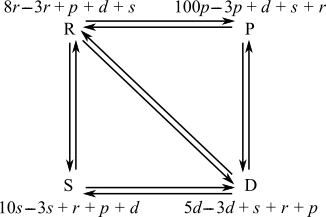 Simon from Sefton Park School in the UK displayed this nicely in a table:
Frankie noticed that if you take 1 ruby, 1 sapphire, 1 pearl and 1 diamond from each jeweller, they will all still have collections of gems of equal value, so:
4 rubies = 6 sapphires = 96 pearls = 1 diamond 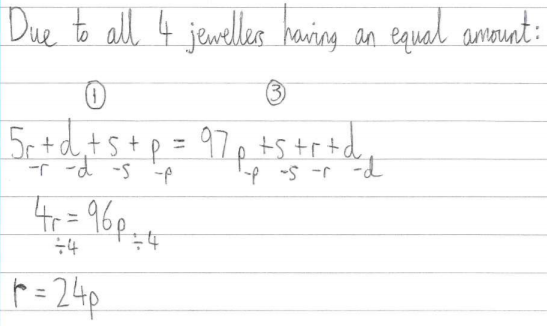 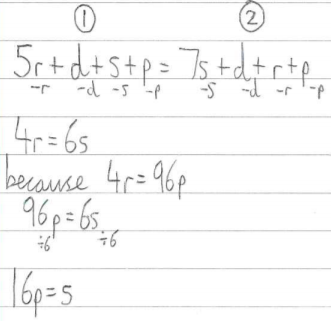 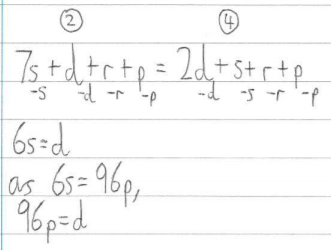 Adithya from Hymers College and Liam from Grange Primary School in Australia used similar methods not involving algebra. This is Liam's explanation:

Joel, Frankie and Zach all used algebraic versions of Liam's method. Frankie from the Ravensbourne School in the UK wrote:

To work out how much each jeweller had lost or gained, Liam, James, Archita, Srushti, Ray and Alicia, Olivia & Bipanshu found the values of each collection in pearls to compare 'before' and 'after' values. Zach and Hamish both used a table to display the information clearly:

Fai, Joel and Frankie used their previous working to express the loss or gain of each jeweller in terms of the gems they had at the beginning. For example, Frankie had rearranged the equations and relative values to get

Amrit and Lalit also found the changes correcly, Amrit by subtracting algebraic expressions, and Lalit assigning a value of 1000 to each collection. Well done to you all!