If you are training to be good at any sport then you are in the business of optimisation - doing all you can to enhance anything that will make you do better and minimise any faults that hinder your performance. This is one of the areas of sports science that relies on the insights that are possible by applying a little bit of mathematics. Here we are going to think about two athletics events where you try to launch the body over the greatest possible height above the ground: high jumping and pole vaulting.

This type of event is not as simple as it sounds. Athletes must first use their strength and energy to launch their body weight into the air. If we think of a high jumper as a projectile of mass M launched vertically upwards at speed $U$ then the height $H$ that can be reached is given by the formula $$U^{2}=2g H$$ where $g$ is the acceleration due to gravity. Alternatively we can think in terms of energy conservation. The kinetic energy of the jumper at take-off is $\frac{1}{2}M U^{2}$ and this will be transformed into the potential energy $M g H$ gained by the jumper at the maximum height $H$ when he is instantaneously at rest at the highest point. Equating the two gives $ U^{2}=2g H$ again.

It is this possibility that allows a high jumper to control where his centre of gravity lies and what trajectory it follows when he jumps. The aim of our high-jumper is to get his body to pass over the bar whilst making his centre of gravity pass as far underneath the bar as possible. In this way he will make optimal use of his explosive take-off energy.

The simple high-jumping technique that you first learn at school, called the 'scissors' technique is far from optimal. In order to clear the bar your centre of gravity, as well as your whole body, must pass over the bar. In fact your centre of gravity probably goes close to 30 centimetres higher than the height of the bar. This is a very inefficient way to clear a high-jump bar. The high-jumping techniques used by top athletes are much more elaborate. The old 'straddle' technique involved the jumper rolling around the bar with their chest always facing the bar. This was the favoured technique of world-class jumpers up until 1968 when the American Dick Fosbury amazed everyone by introducing a completely new technique which involved a backwards flop over the bar and won him the Gold Medal at the 1968 Olympics in Mexico City. This method was only safe when inflatable landing areas became available. Fosbury's technique was much easier for high jumpers to learn than the straddle and it is now used by every serious high jumper. It enables a high jumper to send their centre of gravity well below the bar even though their body curls over and around it. The more flexible you are the more you can curve your body around the bar and the loweryour centre of gravity will be. The 2004 Olympic men's high-jump champion Stefan Holm, from Sweden, is rather small by the standards of high jumpers but is able to curl his body to a remarkable extent. His body is very U-shaped at his highest point. He sails over 2m 37 cm but his centre of gravity goes well below the bar. 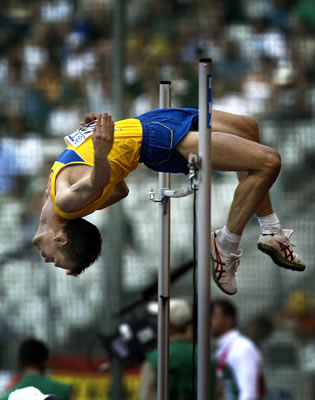 The photographer Peter Kjelleras captures the Olympic high-jump champion Stefan Holm jumping at the World Athletics Championships in Paris, in 2003. Holm dramatically demonstrates his ability to send his centre of gravity far below the bar he is clearing 2.32 metres above the ground.

The high-jumper's centre of mass is about two-thirds of the way up his body when he is standing or running in towards the take off point. He needs to increase his launch speed to the highest possible by building up his strength and speed, and then use his energy and gymnastic skill to raise his centre of gravity by $H$, which is the maximum that the formula $U^{2}=2g H$ will allow. Of course there is a bit more to it in practice! When a high jumper runs in to launch himself upwards he will only be able to transfer a small fraction of his best possible horizontal sprinting speed into his upward launch speed. He has only a small space for his approach run and must turn around in order to take off with his back facing the bar. The pole vaulter is able to do much better. He has a long straight run down the runway and, despite carrying a long pole, the world's best vaulters can achieve speeds of close to $10$ metres per second at launch. The elastic fibre glass pole enables them to turn the energy of their horizontal motion $\frac{1}{2}M U^{2}$ into vertical motion much more efficiently than the high jumper. Vaulters launch themselves vertically upwards and perform all the impressive gymnastics necessary to curl themselves in an inverted U-shape over the bar,sending their centre of gravity as far below it as possible.

Let's see if we can get a rough estimate of how well we might expect them to do. Suppose they manage to transfer all their horizontal running kinetic energy of $\frac{1}{2}MU^{2}$ into vertical potential energy of $MgH$ then they will raise their centre of mass a height of:
$$ H=\frac{U^{2}}{2g}$$
If the Olympic champion can reach $9\mathrm{\ ms^{-1}}$ launch speed then since the acceleration due to gravity is $g=10\mathrm{\ ms^{-2}}$ we expect him to be able to raise his centre of gravity height of $H=4$ metres. If he started with his centre of gravity about $1.5$ metres above the ground and made it pass $0.5$ metres below the bar then he would be expected to clear a bar height of $1.5+4+0.5=6$ metres. In fact, the American champion Tim Mack won the Athens Olympic Gold medal with a vault of $5.95$ metres (or $19^{\prime }6\frac{1}{4}"$ in feet and inches) and had three very close failures at $6$ metres, knowing he had already won the Gold Medal, so our very simple estimates turn out to be surprisingly accurate.

John D. Barrow is Professor of Mathematical Sciences and Director of the Millennium Mathematics Project at Cambridge University.