There are many ways to solve this one, and we received a lot of great anwsers. Since the questions appear to get harder and harder, let's start with the first problem.

What is the largest rectangular area of land you could fence off with 40m of fencing?


Amy tried lots of different possible side lengths for the rectangle. She used the base times height formula to get the area.


From this I think that the answer is 100m2 because the table shows the less
gap between the two numbers the larger the area and there isn't a gap
between 10 and 10 so it must be them.

This reasoning sounds right, well done. Don't worry that with a base and height of 10m the area fenced off makes a square; a square is just a special kind of rectangle! If we do a bit more thinking can we be absolutely certain there isn't some way of improving on 100m2? Nathan used the letters x and y to represent the  base and the height of the rectangle.

This is exactly right. If you draw a graph of the function 20x-x2 you'll see that it is highest at x=10, with a value of 200. There are also advanced techniques which can help find the highest point if you can't draw a graph.

What is the largest rectangular area you can fence off with a wall for one side? 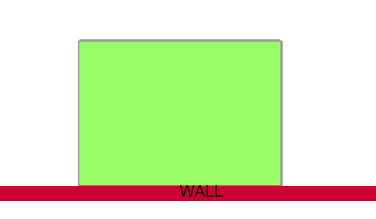 Braiden noticed the following, and made a list of possible solutions.

The second question gives you the same amount of fence sections but only three sides of a rectangle need to be filled.

With trial and improvement he found that a 10 by 20 rectangle was the best. Well done. Can you see how the algebraic method with x and y might be used for this question too? We can say that the side opposite the wall is length x, and the other two fenced sides are length y.

Now draw a graph or use advanced techniques to find the highest point of this function: 40y-y2. At y=10 we get an area of 200m2. Notice that in this case x=20, so the fenced area isn't a square.

What is the largest area you can fence off with the attachment point marked?


This third problem is the hardest, but both trial and improvement and algebra can help us find the answer. Kaedan noticed that you can split the area into smaller rectangles. The picture below might help too. 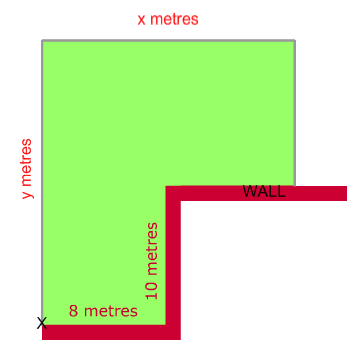 With the sides labelled what is the area covered? And what is the length of fence used? A few people managed to work this one out, well done!

Some people made a table of values to work out the last bit, and the algebra works too.

Extension: what about curved fences?


There are so many different shapes with curved sides, and you might not know a formula for the area for each one. Try a few shapes that you do know the area of and see what you can come up with. Can you beat the best values we found with rectangles and straight sides? Do you need different shapes or will one always win?
The NRICH Project aims to enrich the mathematical experiences of all learners. To support this aim, members of the NRICH team work in a wide range of capacities, including providing professional development for teachers wishing to embed rich mathematical tasks into everyday classroom practice.