Experiencing and talking about position and direction
Interpreting and representing spatial relations with 2D plans, pictures and symbols

Adults could provide maps to follow and map-making materials such as large or long pieces of paper, clipboards and pens.
The Activity
Take the children on a walk in the local environment. Together, note landmarks to help to remember the route and take photos. Afterwards, invite the children to recall the route (the sequence of landmarks and turnings) and together make a simple map with photographs. Invite children to repeat the route following the map.

Describing
When walking and recalling the route, use position words (e.g. next to, between, in front of, opposite), directions (across, left, right) and sequencing words (e.g. before, after, next). What did we see after we went across the road?
Reasoning
Put photographs in the wrong order for the children to correct. How do you know that this is in the wrong place? What should it be next to?
When following the map, ask, How do you know we are going the right way? How do you know which way to go now? What do you think we will see next?
Opening Out
Provide a new map of a route for the children to follow, with different landmarks to spot, and challenges of turning left and right.
Introduce symbols instead of photos, perhaps agreeing together on which symbol to use for a specific type of landmark (choosing simple ones that are easy to draw).
Make maps of routes indoors and outdoors, with photos or symbols.
Recording
Children can draw or place symbols or photographs to create their own maps of familiar routes, such as from home to school, tracing the route with a finger to show the way that they went. Children might enjoy discussing their maps with their family. 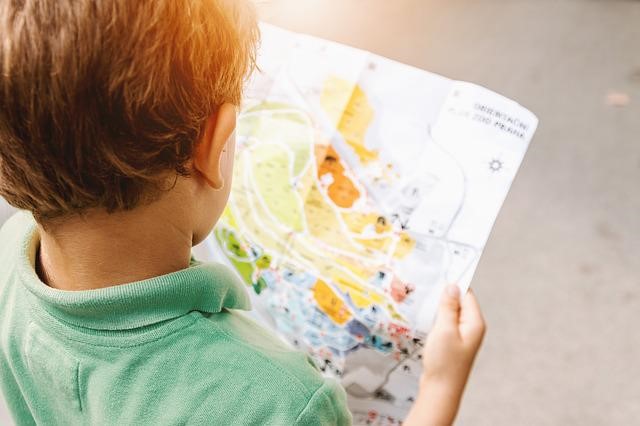