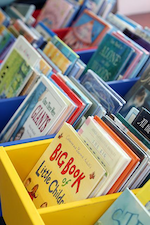 Parents and adult caregivers often help children with their schoolwork. They 'hear them read' at home, typically discussing the story afterwards and they help with spelling. Sometimes they go into school and help with reading, even art or cooking. These activities raise the status and interest of the subjects in the minds of both parents and children. But, what of mathematics?

I know that many members of the British public (and have no reason to think it only happens here) shrink in fear at the very mention of the word 'mathematics'. Mention numbers, let alone 'geometry' or 'algebra' and nearly everyone has thought of something more pressing to do. While most parents will not deny its importance, maths is simply 'not for them'. Many parents will say quite comfortably, even in front of their impressionable offspring, "I hated maths at school" or "I never could do maths myself".

There are many well-tried ways of getting parents to do mathematical activities and discuss mathematical ideas with their children. They can be encouraged to take a small group of the youngest children for a numerical or geometric activity in the classroom setting. Some schools have maths games and activities which young children can take home instead of, or along with, their inevitable reading book. Homework for older pupils and holiday tasks can be intended to involve parents. Weekend and half term 'Maths Trails' can be devised both in the school grounds and the local environment. When maths tasks and activities are presented as puzzles, problems and games, out of the classroom setting, they will frequently have a go.

It was with this in mind that I put on the first ''Parents, Children and Maths'' session some years ago. It was with a class of Years 3 and 4 children in a Suffolk school. The teacher suggested doing it in the afternoon so that parents could take their children home immediately afterwards. I wondered how many parents would turn up. As it turned out I need not have worried, only those whose work prevented them did not come.

I presented the puzzles and games one after another. It was hardly necessary to go round making sure that the puzzle had been understood and giving the occasional hint, I merely had to judge when to move on to the next activity. The session was, on the whole, a success in that children and parents did maths together and talked about it and that enthusiasm and enjoyment were generated.

Since then, the pattern of the sessions has changed into what has turned out to be a very successful formula. They now usually take place immediately after registration so parents can simply stay on in school after bringing their children. It has been called variously a 'Fun Maths Session', a 'Maths Fest' and a 'Maths Hour'. One school even put on a creche for younger sisters and brothers.

The first time was 'class teaching'. I introduced a puzzle for the parents and children to work on together. Inevitably, some had finished long before others, and I felt compelled to go on to the next activity while some were still immersed in what they were doing. Any equipment required was also problematic, because everyone needed it at once, so it had to be given out, and then collected again because space was very limited with 17 extra adults in a smallish classroom. At the end, too, it trailed off with no very definite climax or finish.

Now I know what I am doing and have a well rehearsed 'lesson plan'. The first thing to do is to organize the adults so that none sit next to each other! Each time I have run a session pairs of children have worked with a parent, teacher or classroom assistant. Always I end the initial instructions with, "The most important thing is for you to talk together about what you are doing".Then I start with a problem for all do, usually involving scissors, hoping that everyone will not finish at the same time. I have available a selection from my collection of 'puzzle cards', games and other activities on a table. Each one that requires any equipment has a plastic bag that goes with it. When they have finished the initial problem the children come and choose an activity and take it back to their places.

The adults are there to help with reading instructions as well as being involved in what the children are doing. Again, when they have finished with what they have chosen, the children simply bring it back and choose another. This goes on for about an hour.

When I, in consultation with the teacher, decide that it is time to end this part of the session, the children are asked to return the activities. We then have a 'plenary' in which children come to the front and tell the rest of the class, and the assembled parents, what they liked doing best, which puzzles they enjoyed solving most and how certain ones were done. At the end everybody participating has been offered a sticker with the legend "I have been good at my maths today". Few of the parents refuse these and many go off to work afterwards wearing them as proudly as do their children!

What has not changed since the first session is the atmosphere, enthusiasm and the satisfaction.

The first time I had known that the children would become involved, because children are great at participation. It is the involvement of the parents which is so exciting to watch. Each time I have put on a session there has been that wonderful working buzz of collaborative work, which so warms the hearts of teachers.

The thanks afterwards have always been profuse and the feedback most satisfying. One teaching head wrote: "The Maths hour was an excellent opportunity for parents and children to have fun together solving problems. The Hour was a good stimulus for discussion between child and parent. It raised awareness of how children think."