An Introduction to Magic Squares

Magic Squares are square grids with a special arrangement of numbers in them. These numbers are special because every row, column and diagonal adds up to the same number. So for the example below, 15 is the magic number. Could you work this out just from knowing that the square uses the numbers from 1 to 9?

But why are they called magic?


So the numbers in the Magic Square are special, but why are they called magic? It seems that from ancient times they were connected with the supernatural and magical world. The earliest record of magic squares is from China in about 2200 BC. and is called "Lo-Shu". There's a legend that says that the Emperor Yu saw this magic square on the back of a divine tortoise in the Yellow River. 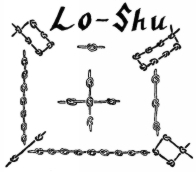 The black knots show even numbers and the white knots show odd numbers. Look closely and you'll see that this ancient magic square is the same as our example above. Magic squares were first mentioned in the Western world in the work of Theon of Smyrna. They were also used by Arab astrologers in the 9th century to help work out horoscopes. The work of the Greek mathematician Moschopoulos in 1300 A.D. help to spread knowledge about magic squares. So here we are now, more than 700 years later, and teachers are using them in class for problem solving and practising addition.

You can make similar magic squares, of order 3, using different numbers. Can you see any patterns in the numbers that work?

Reference:
The Joy of Mathematics by T. Pappas
The NRICH Project aims to enrich the mathematical experiences of all learners. To support this aim, members of the NRICH team work in a wide range of capacities, including providing professional development for teachers wishing to embed rich mathematical tasks into everyday classroom practice.