Miraya from Heckmondwike Grammar School in the UK wrote:

According to all numbers I have tried, I think it is not possible to find a set of five numbers that do not have a set of three that sum up to a multiple of three.

Samuel from Seely Primary School in England, Jimin (James) from BSKL in Malaysia, Harvey from St Nicholas in the UK, Ekaansh from Dulwich College Beijing in China, Kai and Wesley from Wilson's School in England, Ariel from Diocesan Girls' School in Hong Kong and Aditya from Bishop Vesey's Grammar School in the UK used the idea of remainders when dividing by 3. Ekaansh wrote:

I do not think this is possible. This is because any integers we pick would be one of these:

Harvey represented the numbers in a different way, but the idea the same:

We only have to add up these [remainders] (1-2-0) because if they add up and make a number which is a multiple of 3, the left over 3s in the number will make a multiple of 3 anyways.

Samuel exaplined this idea using letters for the types of number:

Since every number has to be either $x$, $y$ or $z$, and that these combinations work, it is impossible to produce a set of 5 whole numbers that any 3 of them do not add up to a multiple of 3.

This is because in a group of 5, it is not possible to have no groups of 3 [of the same type], whilst also not having one of each type.

This is Ariel's explanation of why there will always be three numbers that add up to a multiple of 3:

Therefore, there must be 3 integers that add up to a multiple of 3 no matter what 5 integers you choose.

To be absolutely sure that it's impossible, Aditya found all of the possible sets of remainders that 5 numbers could have: 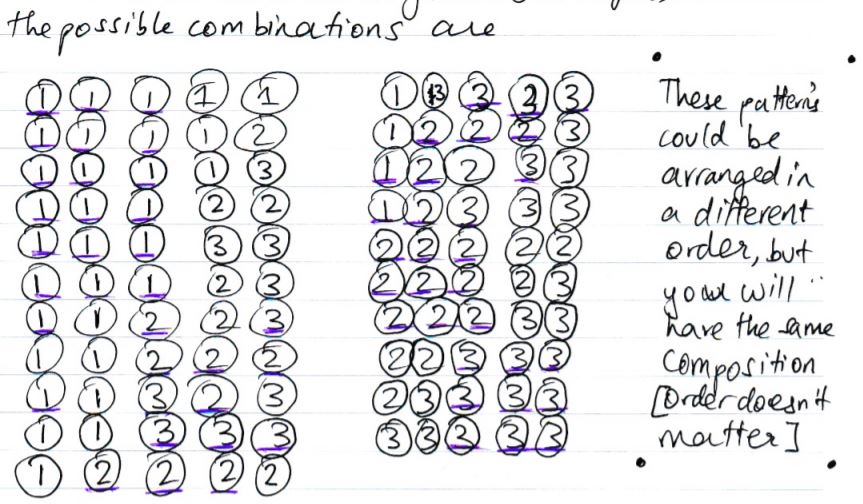 This idea of using remainders is very useful in number theory and is called modular arithmetic.

The second option is we have at least three numbers from one group.

Rin explained why this means that there will always be three numbers that add up to a multiple of three.

Therefore for every combination of five numbers, there are three numbers that add to give a multiple of $3.$

Mahdi used the same idea, but with $-1$ instead of $2$. Everything else works out the same.