We had over 60 correct answers to this challenge. Here are just some of them that also say a bit about what they did.

I used six lego bricks to pretend they were beads on an abacus. I started with six bricks on one side (the units) to make $6$ then swapped it to the tens side to make $60$.
I then took one brick and moved it over to the units side to make $51$, then swapped them over (making $15$).
I moved another from the $5$ to the $1$.
Then I repeated the process until I got to three on each side.

P.S.: I wrote down the answers on a jotter as I went along.

With six beads I made $6, 15, 24, 33, 42, 51, 60$.
I started with all the beads on the units and then just kept moving one across.
I noticed that with three beads you made four numbers and with six beads I made seven numbers so I tried it with four beads and made five numbers, always one more number than beads.

First I drew some abacus on a piece of paper.
Next I drew the beads and wrote the number it made underneath.
I started with no beads on the Tens column and then increased it by one each time and at the same take taking one bead off the units column each time.
I got seven numbers. They were $6, 15, 24, 33, 42, 51$ and $60$.

We had the following splendid picture and notes from a key Stage 2 teacher at Ysgol Aberdyfi in Wales. 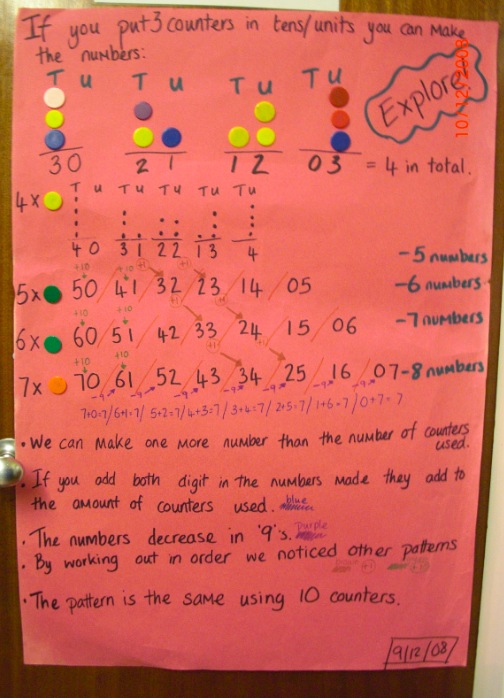