You've probably heard all sorts of reasons for why people need to be better at maths: it will get you a better job, you can work things out quicker or even because it's fun! (though I'm not sure that last one convinces the unconverted.)

But I have another reason, and perhaps this is the most important of all. When you go out into the wider world, you discover lots of seemingly friendly people with big smiles who want to sell you things. It comes as something of a shock, therefore, to discover that not all of those people are entirely honest. In fact, some of them are what are sometimes known as 'rip-off' merchants or con-men (though they are just as likely to be women). And without being good with figures, you may be in danger of becoming one of their victims.

I'm going to give you some examples of 'cons', and see if you can figure out where the trick is.

Here's the first one. 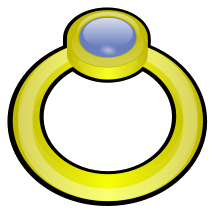 A woman goes into a jewellers' shop and buys a gold ring for £100 (which she pays for in crisp, £20 notes). As she is leaving the shop, she pauses, and then goes back to the counter. I've decided I don't want this £100 ring - I want that £200 ring instead, she says. The jeweller takes back the £100 ring and gives her the £200 one. That will be another £100 then, madam. At which point the customer stamps her foot and says: I don't owe you anything. Earlier on I gave you £100 in cash for the ring. And now I've just handed over the ring as well, which is worth £100. So I've given you £200, and you have given me a £200 ring in return, so we are quits. And with that, she walks out of the shop, leaving the jeweller scratching his head.

Question: can you work out what has gone wrong?

This reminds me of one of my favourite little maths cons. You can use this little trick to show that a full glass is the same as an empty glass - using a little bit of algebra.

Here is a glass of water. Is it half full or half empty? The answer is - it's both, of course. They mean the same thing.

We can represent this as an equation:

This must be nonsense, but can you find the error in this `proof'.

If your algebra is a bit more advanced, you may like this one, by the way: 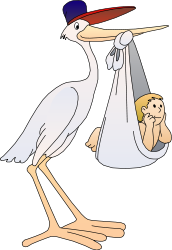 Some of the scams that people pull off are related to probability. For example, there was the case of - let's call her Madam Mim - who claimed to have a fantastic way of predicting whether your baby was going to be a boy or girl, just by waving her hands. No visit to the hospital was required. And for this service she charged £100. Furthermore, she said that, in the event of her prediction being wrong, she would actually return your £100 fee and pay you £50 in compensation for any distress caused. So if she got it wrong, she would pay you £150. What a wonderful service - not many people offer to compensate you like that.

Except Madam Mim had absolutely no skill at all in predicting the sex of a child. This was just a con designed to make money. Can you see how it works? 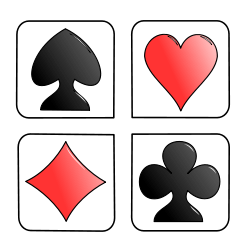 Cons are sometimes presented in the form of games. At the fairground in days gone by, there used to be a con trick known as 'Find the lady'. Versions of this trick are still to be found today. The trickster has three cards, one of which is the Queen of Hearts. He shuffles the cards and deals them face down onto the table in front of you. "Who thinks they can find the lady? Pay me a pound, and if you find the lady I'll give you two pounds", he says, "and just to show you what good value this is, when you've pointed to a card, I'm going to turn over one of the cards that isn't the Queen, and then give you a chance to swap your card".

This sounds a reasonable deal as you will get a choice of two cards and you could win an extra £1 for your £1 stake - so you hand over your pound and point to one of the cards. "Right, now I'll turn over one of the others - look, it's the Ace of Clubs. Now, do you want to stick with the card you have, or swap to the other one that is face down?"

Stick or swap? Well it could be either card, so why swap? May as well stick, you think, since you reckon the trickster is probably trying to con you into giving up the card you chose.

And the result? Well, it is possible that you will win, but it turns out that two times out of three, the trickster will get to keep your pound. This is because the chance of you being right if you stick isn't 50-50, it's actually only one in three. Can you see why?

A popular form of trick to get people to part with their money is what is known as pyramid selling. At some point in your life you are almost certain to be approached by somebody trying to ensnare you in one of these schemes. (One way to be confident that it IS pyramid selling is when they say this ISN'T pyramid selling). Here is the scam. You are told that in return for a small 'investment' you will have a chance to make a lot of money. Your small investment might be £100, and for that you get the chance to sell this investment to a group of other people - ten for example. You need to persuade each of those ten people to buy from you, and when all of them have bought in, you get to keep the £100 that each person has invested. So you make a profit of £900! How do you sell the investment to all these people? Easy - you tell them that it has worked for you, and so it can work for them too. All they have to do is to find ten investors, just like you did, and surely everyone knows ten people who would like to take part.

The reason why it is called pyramid selling is easy to understand if you think about the chain of people involved:

and so on, building up a pyramid of 'investors'... 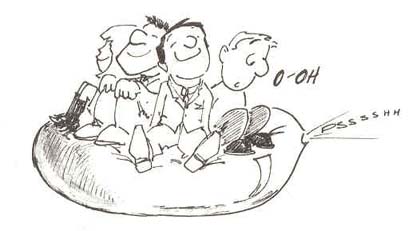 So what's wrong with this? You should be immediately suspicious, because people are making money just by getting it from other people. Nothing is actually being manufactured. One way to see why this is nothing but a con trick is to imagine there are a million people in the country. How long could this scam go on before everyone has 'bought' a share and there is nobody left to sell to? How many people win and how many lose?

Not all misleading sales pitches are by fraudsters. Sometimes the mistakes are made by people who don't understand the maths themselves. But if you don't understand it either, you are still at risk of being duped.

Recently, a company sent reps around to sell 'cheaper energy' to households. This was their claim; "we can reduce your gas bill by 5% and your electricity bill by 5% - that's a reduction of 10% on your whole fuel bill". Is there something wrong here?

There certainly is. And there's no doubt that there is plenty more dodgy maths where that came from. But with decent maths of your own, you can fight back!

This article is adapted from his book How long is a piece of string ?