Maths Goes to the Movies

This article is part of our Adventures with Complex Numbers collection


Got your popcorn? Picked a good seat? Are you sitting comfortably? Then let the credits roll...

We have all marvelled at the incredibly life-like computer generated images in the movies. What most of us don't realise is that the animals of The Jungle Book and most of the action in super hero films — particularly the star turn of the Incredible Hulk — would not have been possible without mathematics.

But how are these amazing images made? Computer graphics and computer vision are huge subjects. But one particular piece of maths you might learn if you study Further Mathematics at A-level is key to making the magic happen. 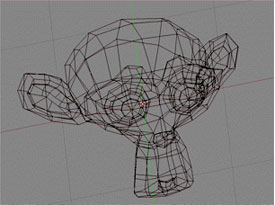 First objects are modelled as wire skeletons made up from simple polygons such as triangles.


The first step in creating a computer generated movie is to create the characters in the story and the world they live in. Each of these objects is modelled as a surface made up of connected polygons (usually triangles). The corner of each triangle is stored as a point in three-dimensional space in the computer memory. Then this surface is realistically shaded to mimic real light, using another mathematical method called ray tracing. (You can read more here and here.) 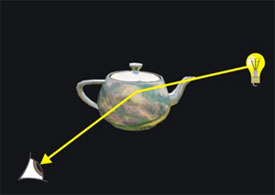 Trace a ray from your viewpoint to a facet. Does it reflect off and intersect a light source?

All it takes is a little imagination

Once our scene is set, and lit, we are still waiting for the director to shout "Action!" and our characters to start moving. And here is where maths brings our images to life.

One of the most basic ways an object can move is to rotate around a given axis and through a given angle. And this movement is made simple by using complex numbers: those numbers that involve the number $i$, where $i^2=-1$.

In particular, we need the geometric interpretation of complex numbers where they are associated with points in the two-dimensional plane, with the real number $1$ sitting on one axis, and the imaginary number $i$ sitting on the other. For example the number $1+i$ corresponds to the point (1,1). Generally, a complex number $a + ib$ corresponds to the point (a,b). (You can explore this way of thinking of complex numbers in the NRICH activities Opening the door and Strolling along.)

Multiplication by complex numbers has a geometric description — rotation.

The wire frames of our characters, however, are stored as a collection of points in three-dimensional space. The person who gave us a way of rotating things in three dimensions is the mathematician Sir William Rowan Hamilton, perhaps Trinity College Dublin's most famous son. He devoted the last two decades of his life to searching for a way to represent three-dimensional rotations in a similar manner as complex numbers can represent rotations in two dimensions.

Hamilton's flash of brilliance, as he walked under Broome Bridge in Dublin, was something he called quaternions. It turns out that quaternions are the most efficient way to rotate objects in three dimensions. But not everyone was happy with his new method of multiplication. Lord Kelvin, the physicist, said of quaternions: "... though beautifully ingenious, [they] have been an unmixed evil to those who have touched them in any way!"

If you've ever stayed on after a movie to watch the entire credits roll you'll be aware that a huge variety of creative talent goes into making a successful movie: writers, directors, actors, costume designers, prop builders... the list goes on. But one name is often missed off that credit list — mathematics. Many of today's movies wouldn't be possible without the geometry of ray tracing or quaternions spinning objects in space. So the next time you settle into your cinema seat to enjoy a CG spectacle, raise your popcorn to mathematics, the hidden star of the show.

This is an edited version of the article Maths goes to the movies by Dr Joan Lasenby, Department of Engineering, University of Cambridge, originally published on Plus. You can explore complex numbers for yourself in Open the Door, and discover more about the many applications of complex numbers with this collection of Plus articles.