Katie had a pack of 20 cards numbered from 1 to 20. She arranged the cards into 6 unequal piles where each pile added to the same total. What was the total and how could this be done?

Can you fill in this table square? The numbers 2 -12 were used to generate it with just one number used twice.

The first edition of this challenge referred to Alison, Becky, Sam and Matt and these two solutions came in.

Aryaman from Bangkok Patana School in Thailand sent in this very good solution:


JunHa, Ezra and Ilman from American Embassy School New Delhi send in a pdf with their work they found answers as follows:


The second edition of the challenge just used different names and these are the solutions that then came in.

Jemima and Alice from Ballard School

Regalo and Jesse the Buxton School

To solve the next problem we knew that ten fitted into two of the statements already, as shown above, so we tried to divide it by three and found that it was not divisible. We then decided to write the next number in its triangular sequence, which was 15. 15 also fits into two statements, so we tried to divide it by 3 and it was divisible. Just to be safe, we divided it by 9, but it was not divisible. Therefore, 15 is the number that fits into 3 different statements (Multiply of 5,  riangular number and multiples of 3 but not of 9).

To solve the last problem we wrote out a vast amount of triangular numbers whilst trying to see if they fit into all 4 sets of statements. As we went on, we found some numbers and tried to divide them by 3, 5 and 9. The numbers consisted of 136, 153 etc, we did this because in order for the number to follow all four sets it had to be a multiple of 5, a triangular number, even but not multiples of 4 and multiples of 3 but not 9. We carried on this process until we eventually got to the number 210. It fits into all four statements and was the lowest number that we could find.
After all of this working out, we concluded that 210 was the smallest number that fit into these four statements.


Luana also from the Buxton School sent in a picture of her work. 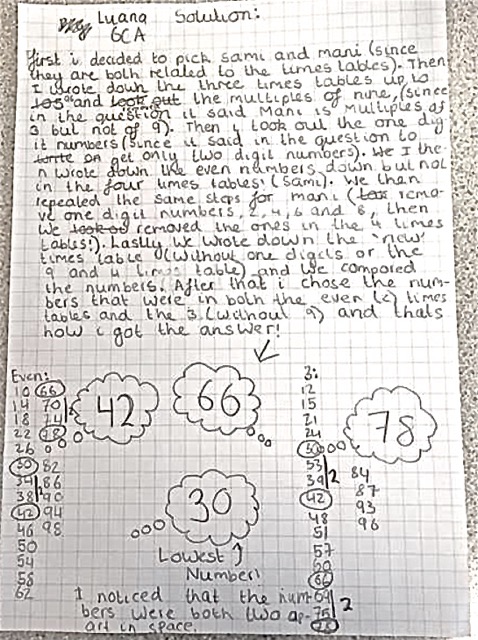 Thank you all for the explanations you've sent in, I am hoping to see more during 2018.