Well done and thank you to everyone who submitted a solution. There were too many good solutions to mention everyone, but this is a selection of the good work we received.

Peter from Highcrest Middle School in the USA found that 5050 satisfied all of the statements.

Shriya from International School Frankfurt in Germany listed numbers which satisfied each statement to find numbers that appeared more than once. 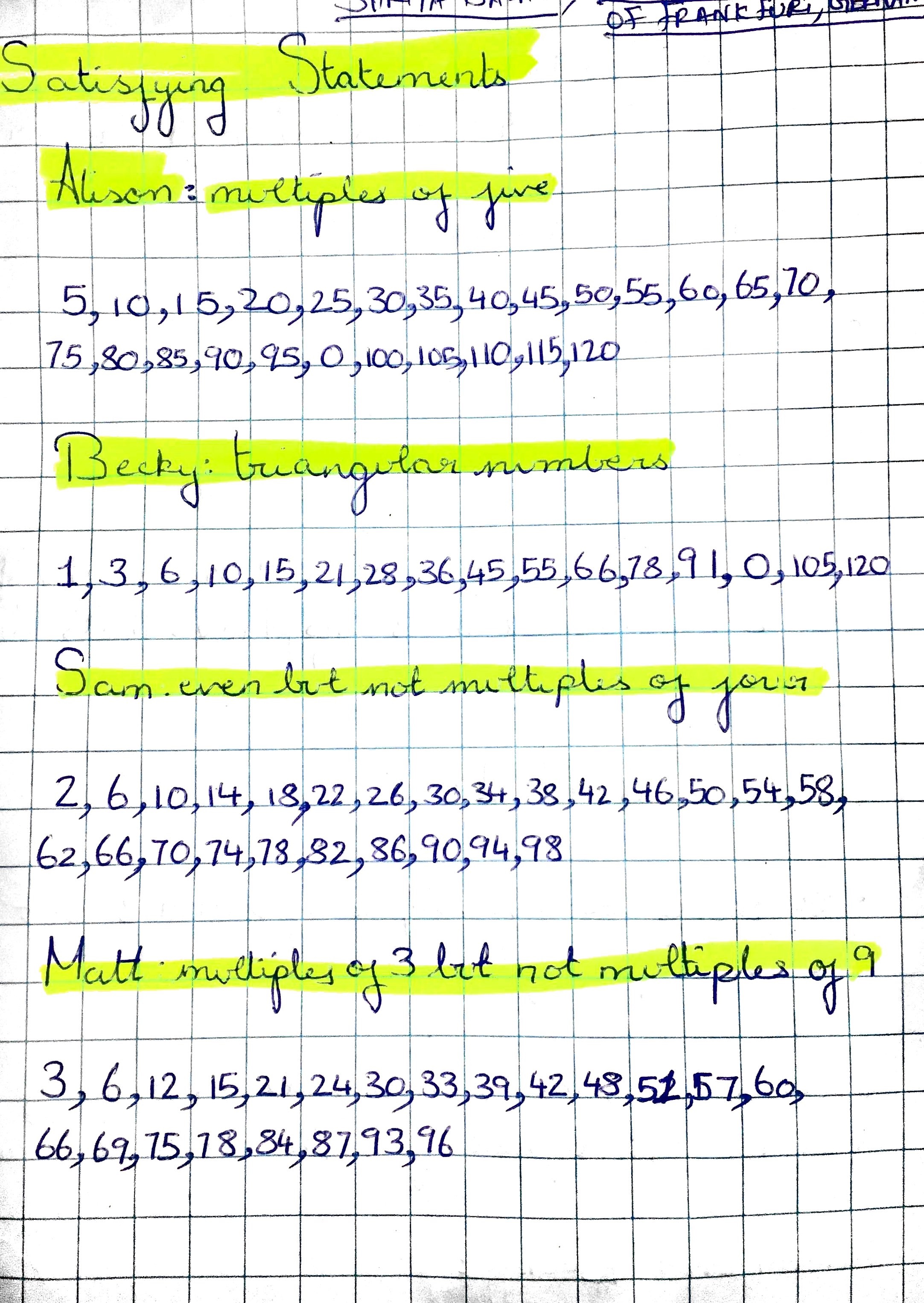 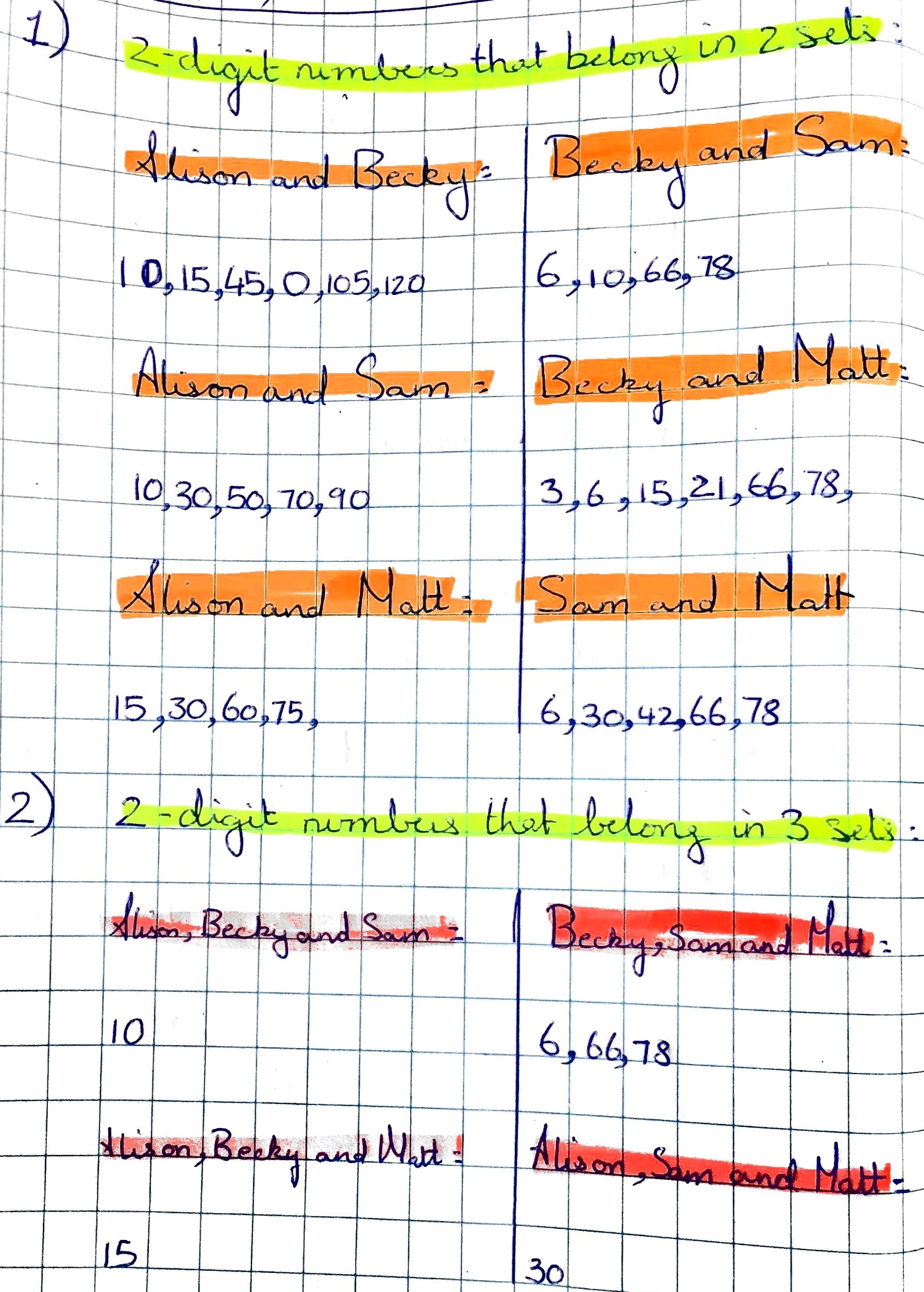 Sophie from Stephen Perse Foundation in the UK sent in a very clear and full solution up to this point. Click here  to see Spohie's work.

Maysa, Rizqin and Soyeon from Greenacre Public School in Australia sent in an image:
The way we did it was to write a 1-100 chart and colourcoded it according
to the statements it satisfied, and that was our answer 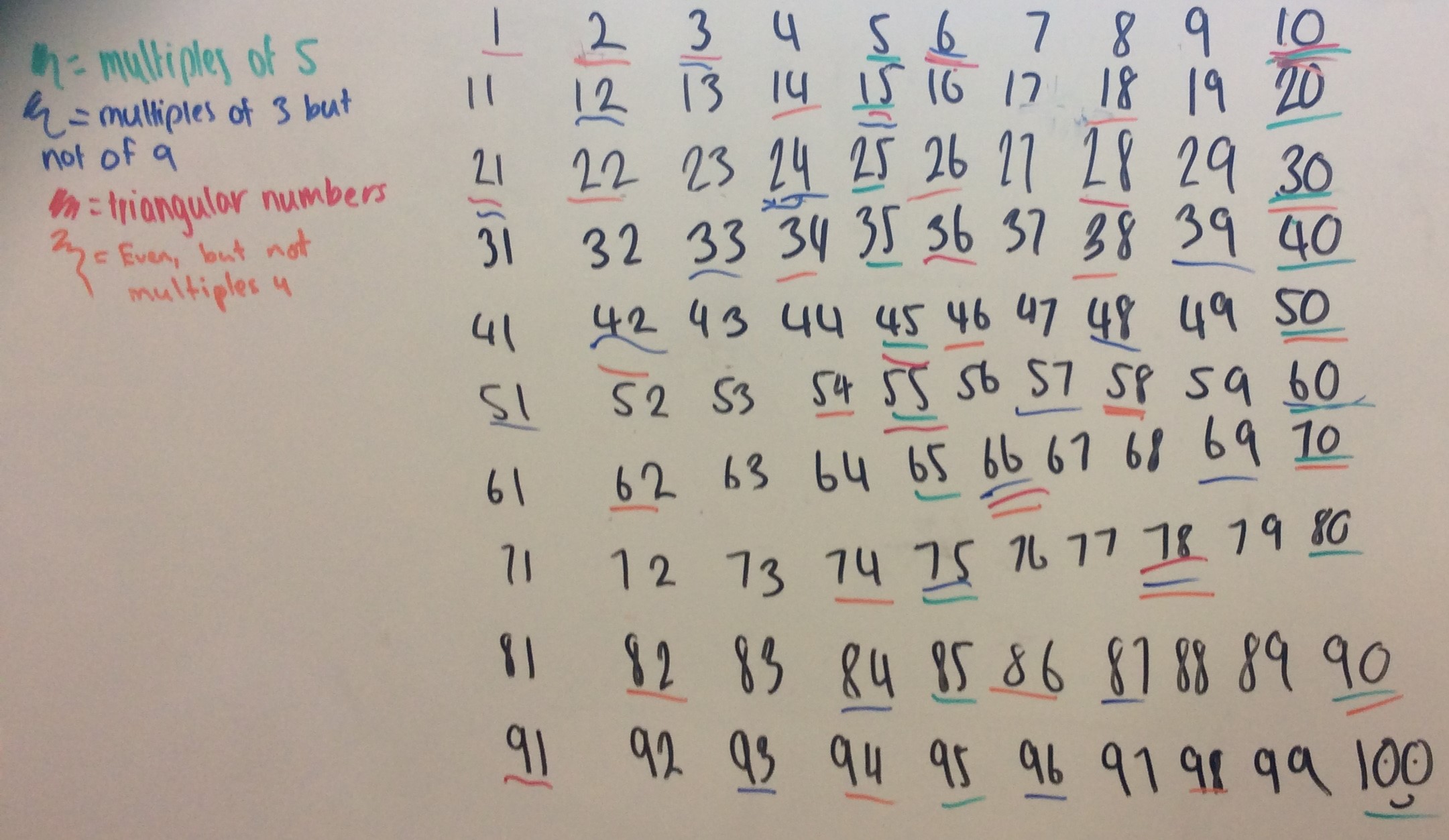 Chloe from Harrow International School Hong Kong used properties of numbers to find a more efficient method:
To find the smallest number that fits into all four sets, one way to do it would be to extend all the lists to find a number which occurs in all four lists. However, that would take a long time.

As this number has to be a multiple of five and even, we know the last digit must be a zero. It also needs to be divisible by three and not nine.

We can narrow this down using the above list for the numbers divisible by 3 but not 9:

The first or first two digits of the smallest number that belongs to all four of the groups must be from the above list.
The smallest triangular numbers that end in 0 are: 10, 120, 190, 210, 300

Of these, the only ones divisible by three and not nine, and are even but not multiples of 4 are:
210 and 300

The smallest number that belongs to all four groups is therefore 210.


Rules for numbers in more than one set
Alison and Sam
Aryaman from Bangkok Patana School in Thailand found two ways of describing these numbers:
List the numbers that satisfy both Alison's and Sam's statements:
{10,30,50,70,90,110,130,150,...}

Year 8 at Badminton School in the UK found an expression for a general number which fits in both sets:
$20n-10$

Alison and Matt
Hannah, Matthew, Fred, Lucas and Liam from Balmoral School in New Zealand said:
When we looked at the relationship between A and M, they contain every first and second multiple of 15, but not the third. The pattern restarts so 15, 30, 60,75, 105 etc. This is because the third, sixth, ninth etc multiple of 15 is divisible by 9.

Someone known as XYZ from Green Oasis School in China said:
The numbers that satisfy Becky's statement follow this description $\frac{n\times(n+1)}2$
To satisfy Alison and Becky's statement, either $n$ or $n+1$ should be a multiple of five.
We get the following set of numbers: 10 15 45 55

Gina from Wimbledon High School in the UK said:
10, 15, 45, 50 etc.
Fit Alison's and Becky's statements. Every 4th and 5th triangular numbers fit both of their descriptions.

Notice that if $n$ is a 4th or 5th number, then $n+1$ or $n$ is respectively a multiple of 5. So this is how XYZ's observation explains Gina's observation.

Sam and Matt
Ashlynn from ISF Academy in Hong Kong said:
Numbers that belong to Sam and Matt's set: 6, 30, 42”¦
Therefore, the numbers are multiples of 6, but not multiples of 9 and 4.

Becky and Sam
Kevin from Harrow International School in Hong Kong found some numbers in both of these sets:
Triangular numbers that are even, but not multiples of 4
(eg. 66, 78, 190)

Becky and Matt
Georgie noticed that:
Every one, then four, then eight, etc triangular numbers there is a pair, e.g. 3, 6, ..., 15, 21, ..., 66, 78, ..., 210, 231.
The NRICH Project aims to enrich the mathematical experiences of all learners. To support this aim, members of the NRICH team work in a wide range of capacities, including providing professional development for teachers wishing to embed rich mathematical tasks into everyday classroom practice.