There were lots of excellent solutions to this problem. Well done and thank you to everyone who sent in their work.


The graph below shows the initial thoughts as to which statements were true. There's no right or wrong answers here - these were just people's opinions. 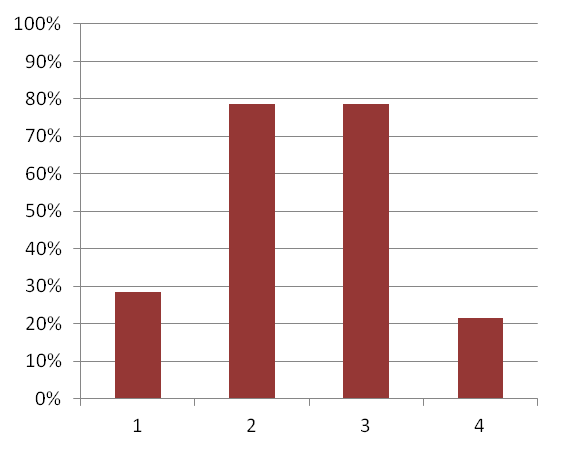 The majority of people thought that statements 2 (Knife crime rates have fallen by 25% since 2009) and 3 (The risk of being burgled in any given year is more than 3% on average) were true.

Most of you thought that statements 1 (The risk to girls of being the victim of a crime is less than 50% of that to boys) and 4 (You are 50% less likely to be very worried about knife crime if you read a tabloid newspaper rather than a broadsheet) were false.


Many possible explanations were given for why people thought as they did. There were lots and lots of excellent contributions here, so I've included just a small selection:

Maddie, from Alleyn's School, thought statement 1 was false:
I thought that 1 couldn't be true because girls are seen as more vulnerable and so I thought they would be targetted more

Alice, also from Alleyn's School, thought statements 2 and 3 were true, because of what she had heard locally and in the news:
You hear less on the London news now about knife crimes than in the last year or two.
Around where I live there tend to be quite a few burglaries and cars getting trashed. The amount of stories that I hear about it made me think that there was more than a 3% chance of being burgled in a year.

Joe, from the same school, thought statement 4 was false:
I know that tabloid newspapers are quite melodramatic and they fiddle with the way they phrase things so that risks seem bigger and it has a greater effect on people, whether it be a good or a bad effect.

Maddie, from Alleyn's School, rewrote the statement to make it true:
The risk of girls being the victim of a crime is less than 60% on average than that to boys.

Nina, also from Alleyn's School, thought that the statement was misleading in a different way:
The statement gave the impression that there was a 50% difference were actually there was only a 3% difference.

This is because the relative risk is being reported, rather than the absolute risk. If you want to know more about this, then take a look at How Risky is a Bacon Sandwich?.

Adam, from the same school, noticed that you were assuming that all crime was violent crime, which wouldn't necessarily be the case.


Adam also explained why statement 2 was true:
It is true that knife crime rates have fallen by a quarter since 2009, dropping from 4647 admissions to hospital down to only 3614.

Rachel explained the assumptions that were underlying this:
There are two assumptions being made in this statement.
1. The statistics only are for those people who are admitted to hospital. These therefore won't include anyone who is threatened with a knife but not attacked.
2. The admissions are for assault by a sharp object. These may not all be with knives, and they may not all be deliberate crimes - someone may have fallen over whilst carrying something sharp.


Romy, again from Alleyn's School. was able to explain why statement 3 was false, and to re-write it:
If there are about 25 million households in the UK and 197,000 burglaries that would work out to be about 0.8% risk of a house being burgled.
The correct statement is: The risk of being burgled in any given year is 0.8%.

Elena, from the same school, was able to re-write the statement:
You're 50% less likely to be worried about burglary and mugging if you read a broadsheet than a tabloid newspaper.

She's also noticed the assumption being made, that there are only two types of crime mentioned. We could assume that it would be the same for all types of crime, but we don't necessarily know that this is true.


Thank you and well done to everyone who sent in solutions - there were too many of you to mention everyone individually.
Handling data. Frequency tables and Bar Charts. Collecting data. Carroll diagrams/Two way tables. Processing and representing data. Sampling and hypothesis testing. Interpreting data. Probability distributions, expectation and variance. Comparing data. Frequency distribution.
The NRICH Project aims to enrich the mathematical experiences of all learners. To support this aim, members of the NRICH team work in a wide range of capacities, including providing professional development for teachers wishing to embed rich mathematical tasks into everyday classroom practice.