The first article Mathematical Problem Solving in the Early Years pointed out that young children are natural problem setters and solvers: that is how they learn. This article suggests ways to develop children's problem solving strategies and confidence. Problem solving is an important way of learning, because it motivates children to connect previous knowledge with new situations and to develop flexibility and creativity in the process. Therefore it is important that children see themselves as successful problem solvers who relish a challenge and can persist when things get tricky.

What does mathematical problem solving look like for three to five year olds?
Problems are essentially things you do not know how to solve. If children know or are told the method to use, then they are not problem solving: therefore one child's problem is another child's routine exercise.  This means that in the early years, even very simple activities may be a problem for one child but not another: more interesting problems involve alternative solutions using different mathematical ideas. When laying a table, a child could either get plates one at a time, or they could count the chairs then the plates, or they could just make sure they have more plates than chairs and tell everyone to help themselves! These strategies involve diverse aspects of mathematics, such as one-to-one correspondence, counting and cardinality, or estimation and number comparison. Reviewing and discussing these alternative solutions can help children learn about both mathematics and problem solving.

Quality provision in the early years encourages children to pose their own problems, with a range of possible solutions. For instance, with construction materials, children can decide to make a car for collaborative play, make houses for the three bears or make an abstract pattern. More flexible resources can create more mathematical opportunities, prompting children to choose shapes according to their properties and to explore different combinations and arrangements. Sometimes it is hard to identify whether children are engaged in problem solving, but if you are aware of the potential mathematical learning in an activity, then observing children can reveal their decision making, such as when children choose certain blocks before they start building or dismantle a construction and use a more efficient arrangement. Discussion with a child can help them to articulate why they chose certain shapes or changed their minds.

Creating opportunities for problem solving
If children do not set their own problems, then developing their problem solving strategies and confidence becomes an equal opportunities issue: teachers will need to find problems which engage children. Problem solving opportunities can be created by providing resources, by giving children responsibility within everyday routines and activities or by identifying issues for discussion sessions. Sometimes it is possible to opportunistically pose an appropriate challenge, like, 'What's the biggest arch you can make with the blocks?' or problem solving can be planned into routine situations, like sharing fruit or following a recipe.

Projects and stories offer opportunities for bigger problems, such as deciding by voting, redesigning an area, resolving a dilemma for story characters, or giving instructions for making a hat for a giant, and these can be the focus of group discussions. The issue is not so much who thought of it first, but whether the children engage with the problem and come to see it as their own. The art of problem posing involves presenting a situation as genuinely problematic for the adult or character involved: engaging children with blatant errors, muddles or injustices is one way of doing this, as with missing big trucks or an unfair distribution of pirate gold.

Planning for problem posing
According to Carr et al (1994) three things affect the level of difficulty for children:

This implies that, in a familiar context with a clear purpose, such as sharing fruit, children will be able to deal creatively with more mathematically demanding challenges, perhaps involving remainders and fractions, but in an unfamiliar context they may only demonstrate basic skills. Carr et al (1994) also suggest that children need to feel in control of the outcome, or they may just look for the right answer to please the teacher. Familiar contexts and purposes do not have to be 'real': young children will readily engage with toys' dilemmas and be outraged by pirate panda's selfishness in Maths Story Time. This suggests that young children need problems: What makes a good problem?
Educationally rich problems may have more than one solution and can be solved using a range of methods at different levels. The pirate panda activity in Maths Story Time is based on a 'redistribution' problem, where 12 biscuits are shared between two dolls, then another one comes along wanting a share (Davis & Pepper, 1992). Researchers found 26 different solutions among 45 pre-school children, suggesting they were not using learned methods, but instead were adapting what they knew. This was a genuine problem for most young children, as even 8 year olds had difficulty explaining their solutions.  The main strategies used for redistribution were:

Surprisingly, the quickest solution, of taking two from each, was used by some children who were not yet counting and would not have been considered mathematically proficient.  The last strategy of crumbling the biscuits was not anticipated by researchers, who reluctantly acknowledged it was a successful solution (and indicated some creative problem solving!). The researchers also concluded that some children were prompted by this problem to reveal an intuitive understanding of ratio, as they could just 'see' how to split six biscuits in the ratio 2:1; they also seemed to recognise that this would result in three equal numbers. This problem therefore engages children in a range of mathematical skills and ideas, such as counting, subitising, comparing and recognising numerical relationships. It is an educationally useful problem because it can be tackled successfully by all children, whatever their mathematical proficiency, and gives experience of adapting a range of mathematical knowledge in the stages of problem solving, by devising a strategy and checking that a solution had been reached.

Sharing problems are very useful because they are familiar and purposeful, and the level of difficulty can be easily adapted: for instance this problem can be simplified to just six biscuits; the pirate panda version in Mathematics Story Time includes more toys, and Pat Hutchins' story,  'The Doorbell Rang' (Using Books) is essentally the same problem with more biscuits and an ever increasing number of children. Variations can include remainders, such as 10 shared between three: it is interesting to see if children suggest solutions such as subtracting one (usually by eating the extra one) adding two more, or dividing into thirds. If children have relevant experience of fractions, even four year olds can tackle problems such as four biscuits shared between three, or seven shared between four (Anthony and Walshaw, 2007:181). Therefore sharing problems can involve a range of mathematics ideas, from 'same number' to fractions of wholes and numbers.

As identified in Jennie Pennant's article, Developing Excellence in Problem Solving with Young Learners, the stages of problem solving include 'getting started', 'working on the problem', 'digging deeper' and 'reflecting'. Of course, some children may just rush towards a solution without going through preliminary or reflective stages. Deloache and Brown (1987) observed the following levels of sophistication in approaches, with two to three year olds ordering nesting cups and four to seven year olds making a train-track circuit:
'Brute force' is a strategy familiar to anyone who has watched young children trying to solve puzzles. The 'redistribution' problem provides further examples: those who crumbled the biscuits used 'brute force'; some children got into cycles of 'local corrections' by taking too many from one doll and then having to give back from another; others 'dismantled' and started again. The children who used fewest moves may have considered multiple relations, taking all dolls into account at once and those who 'just saw' the solution may have been seeing the problem holistically. It is interesting to speculate whether this sequence of approaches just applies to young children: certainly adults have been observed to employ 'brute force' when problem solving at times!

Research suggests that mathematical problem solving processes look essentially the same at any age and young children employ similar strategies to older ones: it is experience rather than age which makes a difference, according to Askew and Wiliam (1995). At the different stages in the process, successful problem solvers' strategies include: This list includes strategies identified by Jennie Pennant for older children, such as trial and improvement and being systematic. Young children readily use these strategies: for instance, Deloache and Brown (1987) found that, when looking for a lost camera, some three year olds used systematic strategies by searching only in places visited since it was last seen. Young children can also plan reflectively: Gura (1992) found that children who were more experienced with blockplay tended to plan before building, by selecting the blocks they would need. Deloache and Brown (1987) also found three year olds used planning to find a hidden toy: when they had to wait before they could start searching, they rehearsed verbally or by looking repeatedly.  This suggests that presenting children with a problem before providing resources can prompt reflection and planning. Coltman et al (2002), who posed shape construction problems to children, also found that encouraging them to check meant they later did this themselves.

Supporting children's problem solving
Adults can therefore help children to be aware of processes and strategies, and to review their initial solution and consider alternatives. Burton (1984) suggested that children be taught to use 'self-organising questions' at the different stages. Examples for younger children might be: Curtis (1998) concluded that adults who modelled curious, questioning behaviour encouraged this in children, suggesting that modelling attitudes may be as important as teaching strategies. Adults who acknowledge difficulties and being 'stuck', but who also demonstrate perseverance, can therefore help children to persist and become positive problem solvers.

Assessing problem solving: Characteristics of effective learning
As well as demonstrating children's understanding and use of mathematical ideas, problem solving clearly allows children to demonstrate the EYFS 'Characteristics of effective learning' in mathematics (see the Early Years Foundation Stage Framework): it involves children in Playing and exploring, Active learning and Creating and thinking critically, as exemplified for inspectors of mathematics in the chart below (Ofsted, 2013). This includes aspects such as being willing to 'have a go' and noticing patterns, as well as making decisions about problem solving, including planning, checking, changing strategy and reviewing. 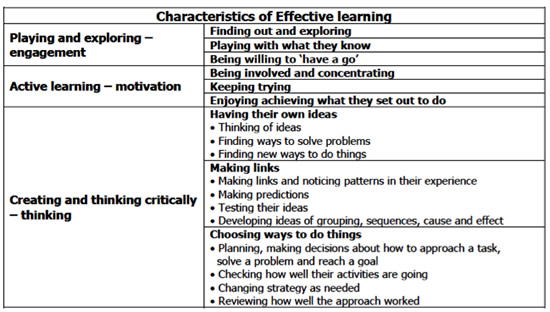 Most importantly, rich problems develop children's confidence and flexibility in using the mathematics knowledge they have to choose and create strategies, developing problem-solving skills for life.