Travelling around we often need to know how far a place is away.  Somewhere in Europe you could see this sign:

Here the distance to Pie is shown in kilometres: 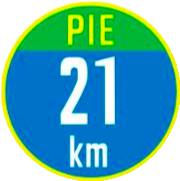 This sign tells you that it's 85 miles to London: 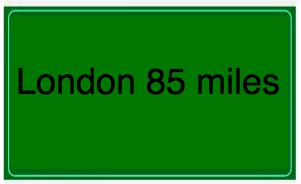 Your first challenge is to match up pairs of distances (one in kilometres, one in miles) that are equal.

Your second challenge is to match the journeys above to the distance between each of these pairs of cities:

This problem gives a context in which learners can become more familiar with units of distance and begin to convert between them.

Start by talking with the children about the distance signs they may have noticed when on journeys. Some children may know that in some countries the distance is measured in miles and in others in kilometres. If not then introduce that information yourself. You may also need to explain the relationship between miles and kilometres (1km=$\frac{5}{8}$mile).

Give the group the information about the journey distances in miles and kilometres and invite them to talk to a partner about how they will match them up.  Share some ideas and perhaps work through an example together before giving children time to work in their pairs on the rest of the challenge.

For the last part of the task, you will probably need to give learners time to do some paired research.

Tell me how you got your answers.

Ask the children to create their own set of questions about the places in and around where they live.

Further extensions could be given concerning these journeys, where you give some information and ask them to find the rest.  For example: These distances might be useful to you for further work:
Mumbai to New York - 9768 miles, 15720 km
Dar es Salaam to Sydney - 7180 miles, 11555 km
Jakarta to Ottawa - 9714 miles, 15633 km
Cape Town to Nairobi - 2547 miles, 4099 km
Melbourne to Perth - 1692 miles, 2722 km
Auckland NZ to San Diego - 6502 miles, 10465 km
The NRICH Project aims to enrich the mathematical experiences of all learners. To support this aim, members of the NRICH team work in a wide range of capacities, including providing professional development for teachers wishing to embed rich mathematical tasks into everyday classroom practice.