How Risky is My Diet?

This resource is part of the collection Should I Risk It?

Watch the video below, where Prof David Spiegelhalter discusses a newspaper headline about eating bacon sandwiches.

If you cannot view the video, click below to see some alternative text.

"20% greater risk of getting bowel cancer if you eat a bacon sandwich every day!"
So said the headlines.

Of course we're all used to newspaper headlines which aim to shock us with eye-catching numbers.  But how worried should we actually be by statistics such as this?

Should this news be worrying you?
What other information might you want to know to decide how worried you should be?

One important piece of information to know is that, amongst those people who don't eat bacon sandwiches, 5% will at some point get bowel cancer.

How does this piece of information affect your view of the risk involved in eating a daily bacon sandwich? 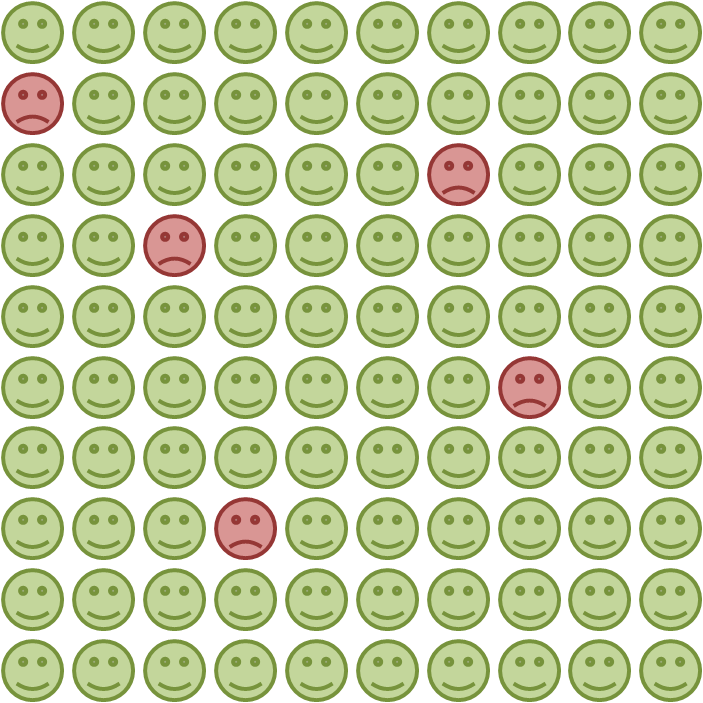 To make our calculations easier, we can use natural frequencies, where we consider what we expect to happen to 100 people.


Suppose there are 100 people who do not eat bacon sandwiches. We can represent the random 5% who get bowel cancer in a diagram like the one to the right.

Now, suppose these 100 people decided to eat a bacon sandwich every day.

Does this help you assess the increased risk that comes from eating a bacon sandwich every day?


The papers announced that eating a bacon sandwich every day increased the risk of bowel cancer by 20%.
Can you now suggest a more useful way of describing the increased risk?

Does your answer agree with Prof Spiegelhalter's calculations in the video? 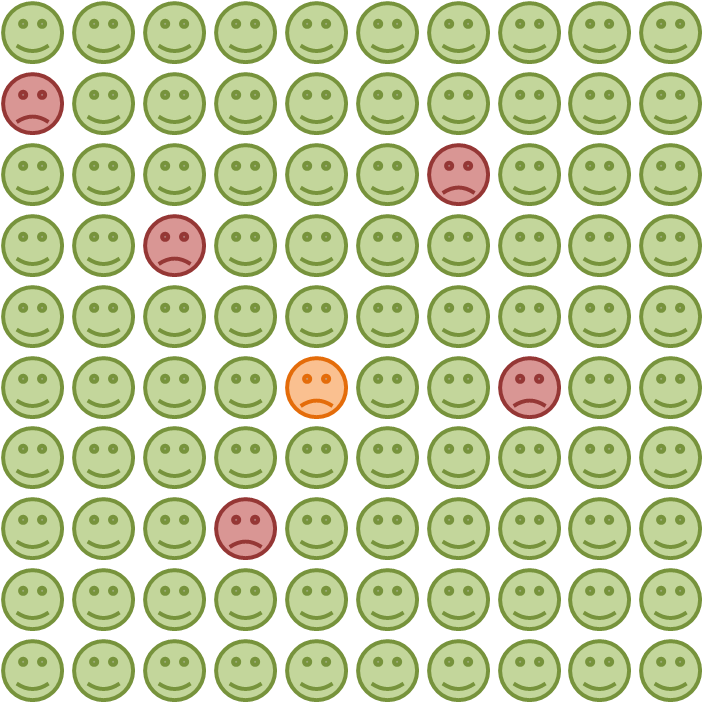 If the 100 people did not eat bacon sandwiches, then we would expect 5 to get bowel cancer.

The newspaper headlines said that we would expect the number to increase by 20%. 20% is the same as $\tfrac 15$, so we would expect an extra one person out of the hundred to get bowel cancer.

The relative risk is the change in the proportion of people affected, which is 20% in this example.

Are you still as worried about the risk of eating bacon sandwiches? How have these calculations altered your views?


Why do you think that the newspaper decided to consider the relative risk, rather than the absolute risk?
If you want a reminder about relative and absolute risk, click the button underneath the video.

If you enjoyed this problem, you might want to have a go at Statins and Risk, which develops these ideas.

Understanding Uncertainty, Professor Spiegelhalter's website, has lots of articles about probability and risk that you might find interesting. There are some suggestions below, but there's lots more you can explore.