This problem offers an opportunity to explore and discuss two types of probability: experimental and theoretical. The simulation generates lots of experimental data quickly, freeing time to focus on predictions, analysis and justifications. Calculating the theoretical probabilities provides a motivation for using sample space diagrams or perhaps tree diagrams.

This problem, together with the follow up task Odds and Evens Made Fair, offers a good example of a Low Threshold High Ceiling activity for secondary students.

This printable worksheet may be useful: Odds and Evens.

You may wish to use the start of What Numbers Can We Make? as a preliminary activity to get students thinking about the effect of combining odd and even numbers.

The notes that follow are based on a lesson with a group of 14 year old students. The first part forms a single lesson on probability and sample space diagrams or tree diagrams. The second part, a collaborative task that leads to interesting and unexpected results, can be found in the extension task Odds and Evens Made Fair.
Start by explaining how the game is played using Set A (perhaps using numbered counters in a bag, or by showing the interactive environment in the problem). Play the game a few times, so that students have a feel for the game but don't have sufficient results to draw conclusions about the probabilities. Then give them some time to analyse the situation so that they can decide whether the game is fair or not, and be in a position to offer supporting evidence for their decision.
While students are working, circulate and observe the methods being used: 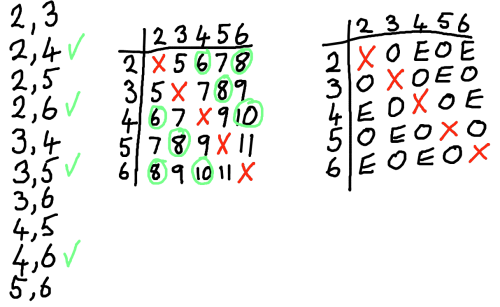 Bring the class together and choose individuals who used different methods to explain what they did to the class, recording what they did on the board. Perhaps choose those who used less sophisticated methods first. Emphasise the merits of a sample space method rather than a listing method, to prepare students for tackling examples with a large number of balls. Those who are confident with tree diagrams may prefer to continue using them.
Now show sets B, C and D, and ask them to think on their own, without writing, about which of the four sets they would choose to play with, to maximise their chances of winning. Once they have had a short time to reflect, ask them to discuss in pairs their choice, and to justify their decisions (again, without writing). There is often disagreement about which set offers the best chance of winning, so bring the class together to compare ideas before setting them the task of calculating the probabilities - discourage them from using inefficient listing methods. You may wish to use the interactivities for sets B, C and D, to compare the theoretical and experimental probabilities.
Now write up on the board a set E, which contains four large even numbers and two large odd numbers. Make them large enough that calculations would be offputting! Ask the class to work in pairs to calculate the probability of winning with set E, and give them a short time frame in which to do this. The intention is to alert students that the numbers themselves don't matter, but the numbers of odds and evens is the important point. Set E has the same structure as Set C, so we already know the chance of winning. Then the class can be introduced to this sort of sample space diagram where odds and evens are collected together:

These representations will be particularly useful in the follow-up problem Odds and Evens Made Fair.

How can you decide if a game is fair?
What are the most efficient methods for recording possible combinations?

Flippin' Discs could be used as a simpler context for exploring theoretical and experimental probability.

The problem In a Box offers another context for exploring exactly the same underlying mathematical structure, and could be used as a follow-up problem a few weeks after working on this one.