Helen made the conjecture that "every multiple of six has more factors than the two numbers either side of it". Is this conjecture true?

Kristof from Moss Hall Junior School in the UK described a method for making a magic cross:
To find all possible magic crosses, a good technique is to think of numbers for a row. Then add the 1st and 3rd numbers but not the middle one. Then you find 2 numbers which also add up to that same number, but doesn't include any of the original 3 numbers. However, not all the ways to pick the [first] 3 numbers can make a magic cross.


Amelia from Slip End Village School in the UK sent in several similar crosses and an interesting comment:

This is a magic cross

I found it by moving numbers around


Libby, Isaac and Thea from Edward Bryant School, Amina, Fatimah and Yasmin from Castle Academy and Mr J's class from Banstead Prep School in the UK explained why you can't put an even number in the middle.
Edward made a video which explains this and some other concepts, which is here: https://youtu.be/9gsXurHs0V8
This explanation comes from Mr J's class:
We were not able to make magic crosses using 2 or 4 in the middle. These even numbers were not possible because you were left with three odd numbers and one even. We could not make pairs of numbers from these that were either two odds or two evens.

To make a magic cross, once you have removed/chosen your center number, you need an equal number of even and odd numbers remaining.

we found these crosses.


What about other crosses with the same number in the middle, which some people counted as different crosses?
Isaac said:
I realized that you can rotate the numbers on the outside around the one in the middle.
Amelia, Bea, Liadan, Hannah, Sophie and Lydia from Sandbach High School in the UK said
There are 8 different rotations or reflections for each different number in the middle.
Diya from International School of Brussels in Belgium sent in an image which explains how to find these 'rotations' and 'reflections'. Diya gets a total of 21: 3 rotations + 4 reflections, multiplied by 3 possible middle numbers. But Diya forgot the original unrotated version, so really there are 8 $\times$ 3 = 24. Click here to see Diya's work. 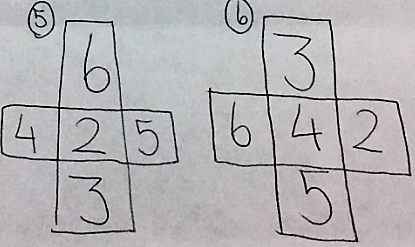 There are a lot more options so these are some of the ones that I thought of!


Owen and Jayseung from Dulwich College Beijing in China found all of the solutions using 2, 3, 4, 5, 6 using a method involving the median:
After experimenting for a long time, we found out that 2, 4, 6 are the only possible numbers in the middle if you do 2,3,4,5,6, because if you have 2, 4 or 6 in the middle, we will be able to pair up the leftover numbers so that their sum is the same. 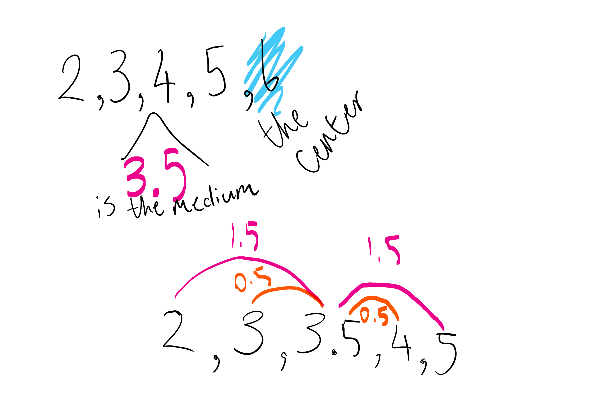 Libby explained why if you only have 2 odd numbers, you can't put an odd number in the middle: 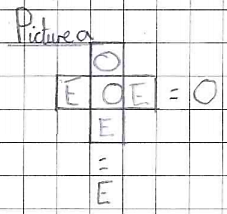 It is the same with even (when there are 2 even numbers).


Year 3 at Moulsham Junior School used numbers which were 10 apart. How are these crosses similar and different to the crosses using 1, 2, 3, 4, 5? Do you prefer the cross-representation, or the V representation? 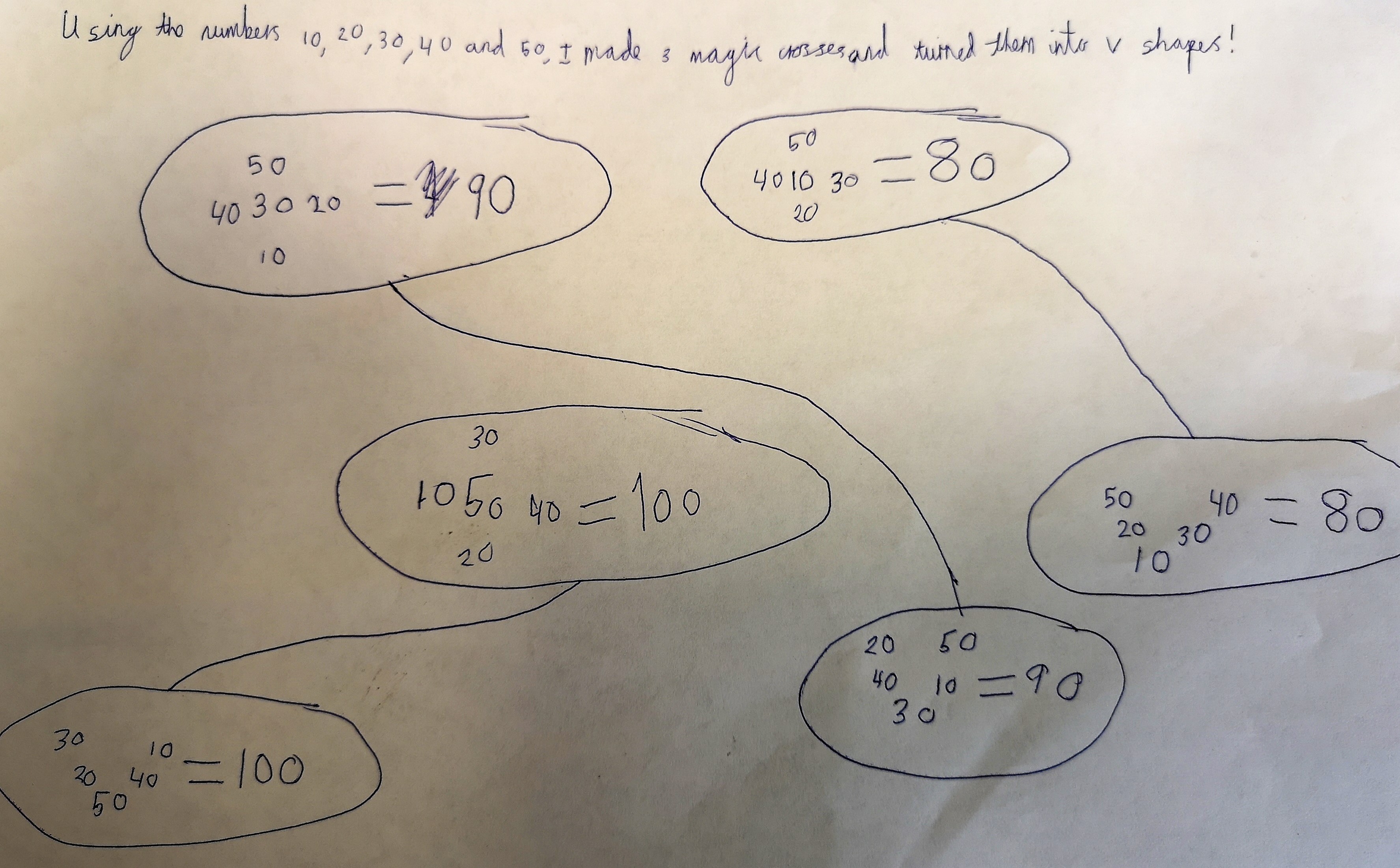 TJ described a new method and made some magic crosses with repeated numbers:
Click here for a larger version of the image. 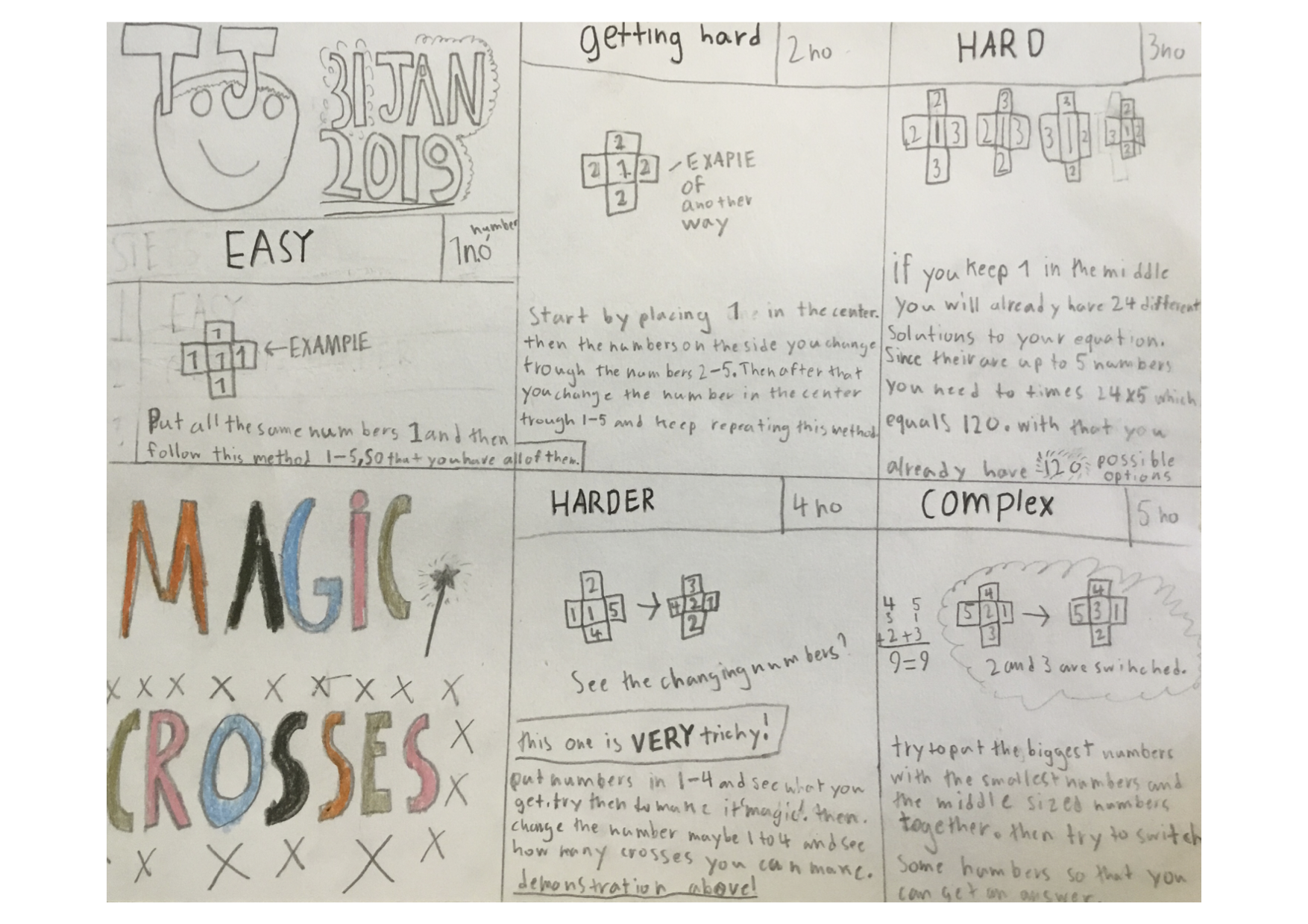 Fede made magic crosses with lots of different sets of numbers:
Click here for a larger version of the image. 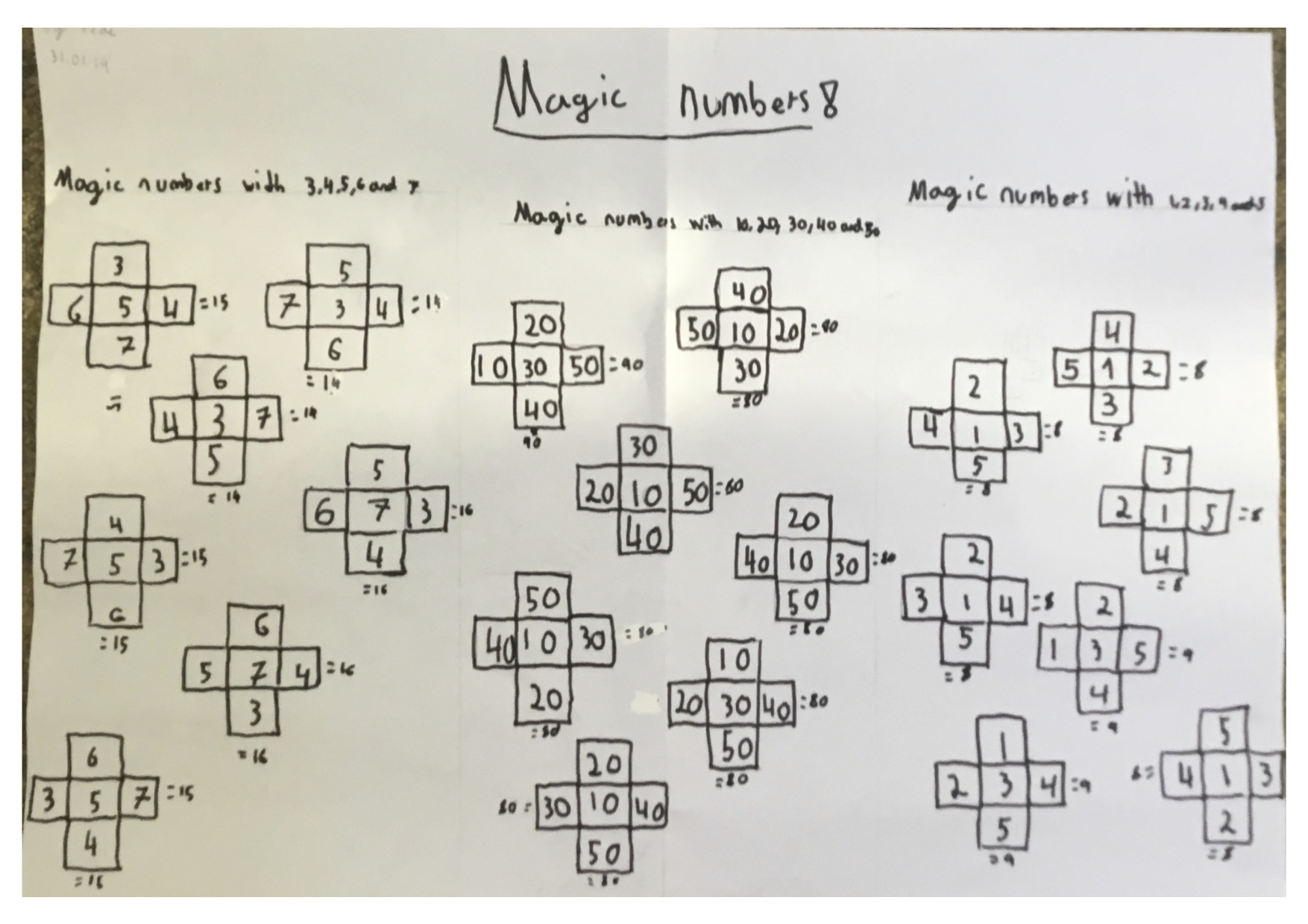 Egor explained how to make a magic cross with any 5 numbers:
Click here for a larger version of the image. 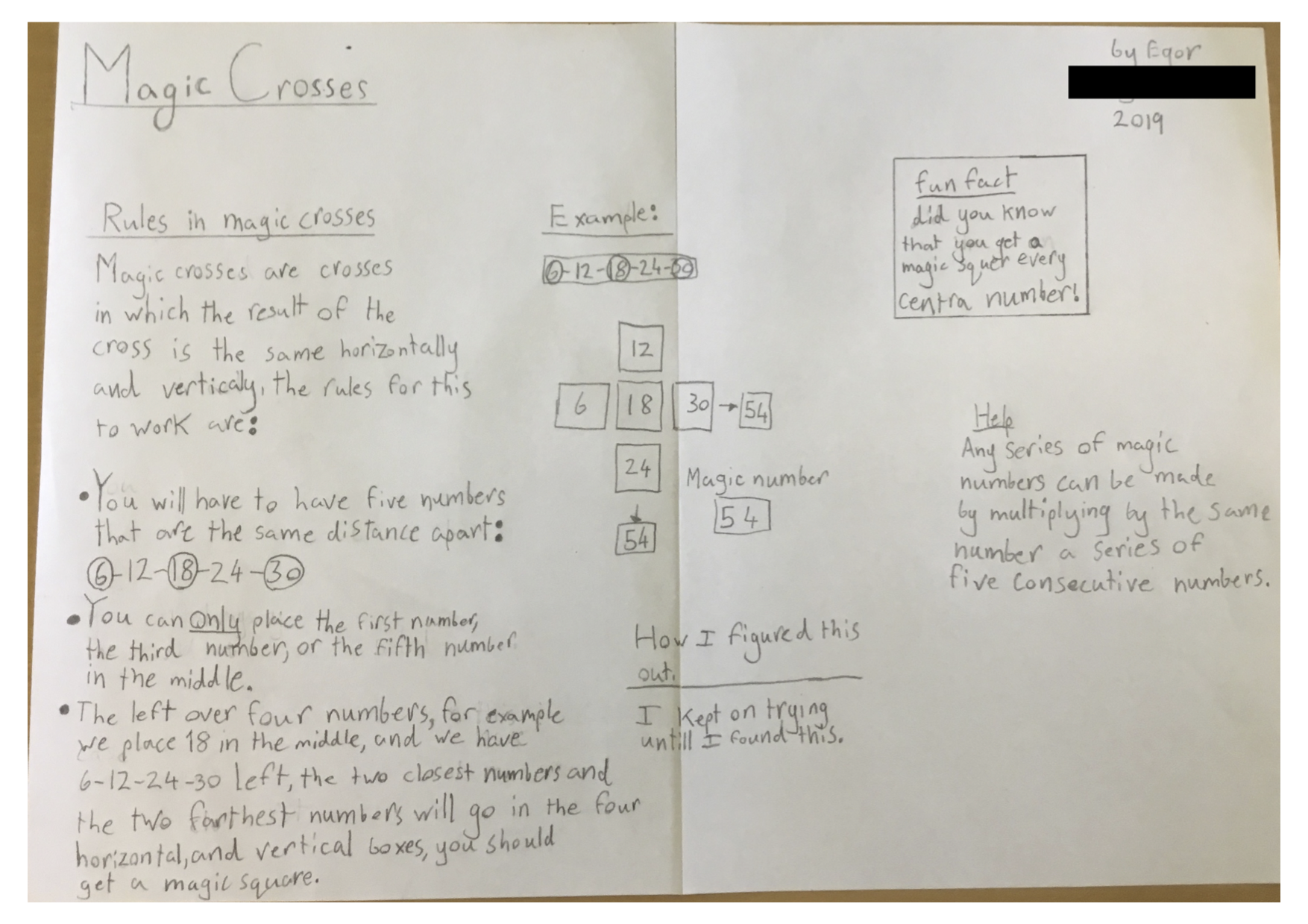 A last minute solution came in from St. Swithun's School (Winchester)the teacher sent in a word doc of Abigail's work which extended the task quite a long way. Here is part the whole doc can be viewed here .docx
There are eight ways to do it with one number in the middle. Even numbers can’t go in the middle because there will only be one even number and three odd numbers. I did this with all the numbers, and I figured out that one, three and five were the only possible numbers in the middle and there were three of them. I then figured out that that two and four were not possible because of the even reason. I figured out that 3 x 8=24 and that there were 24 ways.

A solution came in from Rishi at Orton Wistow Primary School, here is one short sentence of a very thorough solution.

What I’ve noticed in these crosses is that the numbers in both crosses are from 1-5. I have also noticed that in both crosses the digit 4 and the digit 2 remain stationary in the two images.
Rishi's full solution can be viewed here.docx.
Patterned numbers. Addition & subtraction. Odd and even numbers. Place value. Properties of numbers. Multiplication & division. Integers. Creating and manipulating expressions and formulae. Factors and multiples. Generalising.
The NRICH Project aims to enrich the mathematical experiences of all learners. To support this aim, members of the NRICH team work in a wide range of capacities, including providing professional development for teachers wishing to embed rich mathematical tasks into everyday classroom practice.