Investigate sequences given by $a_n = \frac{1+a_{n-1}}{a_{n-2}}$ for different choices of the first two terms. Make a conjecture about the behaviour of these sequences. Can you prove your conjecture?


Hondfa, Laurenc and Shafi from Greenacre Public School in Australia found some numbers that lit up more than one lightbulb for their rules:
Our rules we got for Level 1 were:

2) The rule for lighting up the bulbs - blue and green, is every 18th number after 9. We also found that Numbers 81 and 63 light up 3 bulbs, while the number 261 lights up all four light bulbs.

3) If you want to see if you can switch on a set of light bulbs instantly, you must find out the rule belonging to their light bulb. Once you've done that, find out if they match with each other, merge them together to create a new rule to figure the number to activate a pair, triad or a quartet of light bulbs.


Kevin from Harrow International School Hong Kong also found some numbers that lit up more than one bulb, and included a level 2 rule:
In order to find a number to light up as many bulbs as possible, you need to find the rule of the bulb first and see whether it's possible for another rule of another bulb to have a "matching point” with the rule of this bulb. For example, it shows the rules of the yellow bulb being the multiples of 3 and the red bulb being multiples of 5. Some multiples of 3 has the last digit either a 5 or a 0 which means it's a multiple of 5.
Therefore, it is possible for the yellow and red bulb to light up at the same time (the number 15 works for example).

From the rule of the green bulb, it can land on any digit, including 5 and 0 (Kevin's rule for the green bulb was "Goes up by 8, starting from 7"). So it is possible for three bulbs to light up at the same number, which is the yellow red and green bulbs (again, the number 15 works).


Vicente from King's College Alicante in Spain had a method for finding which numbers will light up more than one bulb:
Yellow: it is rising constantly by $7$ and that the first number is $2$ so you can say that the rule for lighting up yellow is $7n-5$


McKenna from ISL in Switzerland investigated what makes it impossible for several bulbs to light up simultaneously, using graphs and Excel.
The first step to solving this problem is to figure out the pattern. I did this by listing out the numbers that lit up starting at $0$. For the green light bulb I wrote out $0,10,20,30”¦$ It was clear that the pattern could be represented in a linear function; in this case the function would be $y = 10x$. Repeat this 3 more times to get the 4 other bulbs' functions. After I had the 4 equations I immediately thought to plot in in a graph as it would help me visualize the pattern and it looked something like this. The lights light up at the whole number intersections. 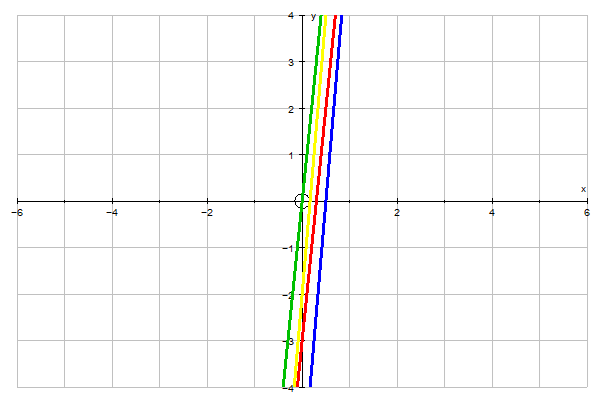 But this representation is problematic as it is unclear when the lights light up. It did shed some light (pun intended) on when lines cannot cross. In the graph above 2 lines (the green and the blue) have the same slope, but crossed the y axis at a different time so they were parallel.

So I used excel to make a table that looks like this... 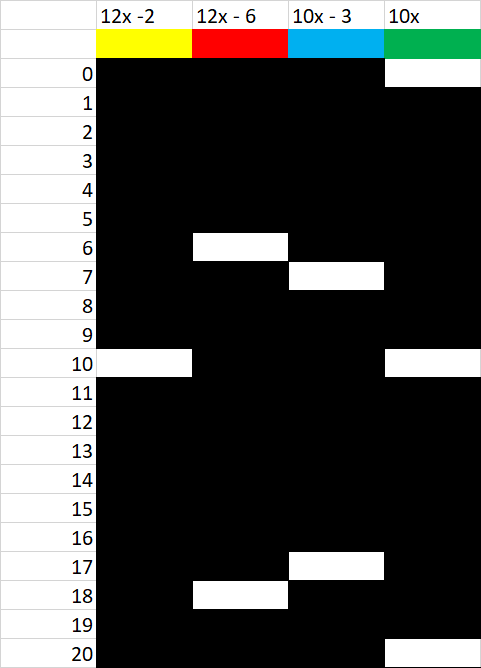 From this table we can tell that blue and green will never light up together because they are parallel (as seen from the graph) this can also apply to the yellow light and the red light. (On the table you can see that the gaps between the white spaces are the same for the green and blue lights, and the gaps are also the same for the red and yellow lights, so in each case the pair can never light up together. This is what McKenna means by 'parallel', although parallel usually refers to lines like the ones on the graph).

McKenna generated new rules to find the rules which light up more than one bulb:

Now when attempting to find out when lights light up together I started by finding the lowest common multiple, LCM, of the slopes.

Finally Herschel of the European School of Varese gave an insight into the method known as the Chinese Remainder Theorem:
We want to find a number that is part of two Arithmetic Progressions (APs): $an+b$ and $cn+d$. To put it another way, we are searching for a number $x$ that satisfies the congruences $x = b$ (mod $ a$) and $x = d$ (mod $c$). (The "mod $a$" part means that you look at the remainder on each side of the equation after dividing by "$a$".)

Finding this value of $x$ that will satisfy both equations and hence turn on both lights can be done using Chinese Remainder Theorem, which deals precisely with this problem - solving congruences.

For more information on the Chinese Remainder Theorem please look at this article.
The NRICH Project aims to enrich the mathematical experiences of all learners. To support this aim, members of the NRICH team work in a wide range of capacities, including providing professional development for teachers wishing to embed rich mathematical tasks into everyday classroom practice.