Angle Measurement: an Opportunity for Equity

I was observing a lesson recently in which the teacher was showing her year seven class how to use a protractor. Admittedly she was following the scheme of work specified by her head of department, but it saddened me to see so many children doing something which they could clearly already do. The teacher was aware of this but felt she hadn't the resources or the authority to do something different. During the lesson, as pupils were working their way through one of the most turgid exercises imaginable, I began thinking about how such work might be made more relevant to such classes - that is classes where the evidence shows that a substantial number of children can already manage, with competence, the skill being taught. Also, I wanted a means by which practice could be embedded within a more meaningful and mathematically coherent activity.

In this particular lesson pupils were working from a text which contained, on one page, a picture similar to that in figure 1, albeit with a greater number of labels. The first question invited them to measure, say, angle $\angle AOB$. This was followed by almost fifty requests for them to repeat the process. The exercise itself was repeated twice more over the page. That is, pupils were given almost one hundred and fifty opportunities to repeat the same task. Ironically, the way in which the task was presented meant that no measurement was needed - pupils could simply read off the required angle from the scale. 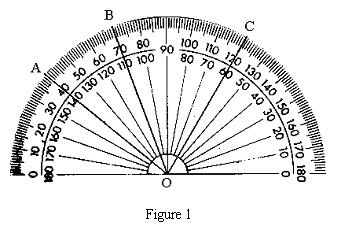 Such exercises, I suspect, have an obvious appeal because they provide much, nay relentless, practice. It is what many teachers believe children need and, sadly, what many parents and school managers think is indicative of good teaching. This is a fallacy and, along with teachers carrying piles of books home for marking, performance indicators and level descriptors, is indicative not of pedagogically sound practice but an English tradition which, in general, fails to find a parallel on the continent.
In its recent review of the attainment of children at Key Stage 3, the Qualifications and Curriculum Authority (QCA, 2001) recommended that "teachers should provide pupils with more opportunities to develop familiarity with units of measurement" and "more practice in reading and using scales". Such invocations concern me, not because I have a principled objection to the sentiments, but because they are presented in ways that suggest that familiarity with units of measurement and practice in using scales are worthwhile ends in themselves. Returning to the lesson that prompted my thoughts, I find it difficult to see how angle measurement could be perceived as an end in itself. It all seems a bit like learning to use a hammer: once I know what it's for, I use it to build something I couldn't have made without it. I don't practice hitting nails into blocks of wood just for the sake of it - at least not in the world I inhabit.


Eventually the idea of using a six-point circle came to me. Drawing one requires a pupil to use a pair of compasses and construct one. But I can justify this because it's a revision of a skill learnt earlier in a new context. So, we can construct a six-point circle as in figure 2. 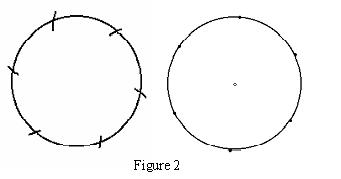 Aside: for reasons of classroom management, teachers may feel anxious about pupils' use of pairs of compasses. In such cases there is no reason why they ought not to provide them with pre-drawn copies.

Now, what task might we offer that will allow those who need to practise angle measurement the chance to do so whilst challenging those who do not with something worth doing? Well, initially, pupils could be invited to draw, by joining points on the six-point circle, different triangles and then encouraged to measure their angles. Some questions they could be asked might include:
Aside: I would not use a protractor like the one above for work like this. Angle is dynamic, not static. It is a measure of turn and a protractor - either half circle or full circle - fails to acknowledge this. I want my pupils to have access to a dynamic angle measurer - one with a rotating arm that allows the learner to see clearly the angle turned. 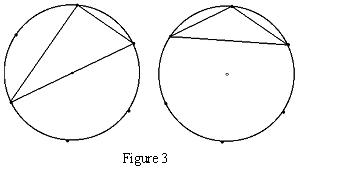 Pupils could be asked to repeat the exercise with six-point circles drawn with a different radius. In so doing, they could be alerted to the constancy of angles in similar shapes.


Of course, for some pupils, the task could become one of proving why the angles are as they are, rather than doing any measuring. For example, the isosceles triangle in figure 3 has angles $120^{\circ}, 30^{\circ}$ and $30^{\circ}$. Why? What are the remaining angles in the right-angled triangle in the same figure? How do I know? What mathematics do I need to know to be able to do it?


A similar task could be repeated for different point-circles - those with eight or twelve points are relatively straightforward to construct. Of course, with dynamic geometry software, any number can be produced and then copied for pupil use. Indeed, Cabri Géomètre has a facility for drawing regular polygons up to thirty sides, which can be adapted easily to draw n-point circles. Examples of the sorts of triangles yielded on a twelve-point circle can be seen in figure 4. 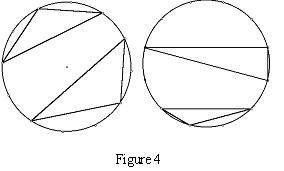 As pupils investigate with different numbers of points, more general questions can be posed. Among these might be

Of course, triangles are but one line of enquiry. We could, as shown in Figure 5, explore quadrilaterals drawn in circles. 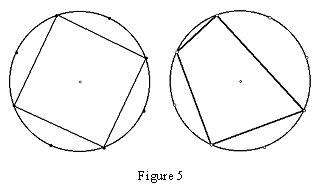 Another avenue might be to explore some elementary circle theorems. For example, in Figure 6, we can see an allusion to the angle at the centre being twice the angle at the circumference when drawn from the same chord. 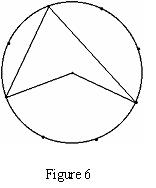 Thus, in a lesson intended to consolidate the skills of measuring angles, pupils may, additionally:

Of course, such an approach does not mean that such topics need not be taught later. It just means, quite simply, that pupils will have been alerted to some mathematically interesting results prior to their formal exposure to them as elements of topics which will be covered later. It means that routine exercises become worthwhile learning experiences in themselves, with links to other topics and an expectation that pupils will engage with proof forever in the fore. Consequentially it means that
In this article I have attempted to establish a principle of worthwhile mathematical activity for all pupils. In so doing, I hope I have gone part-way to convincing colleagues that such tasks are accessible at a range of levels and, therefore, appropriate for mixed ability working. It is my conjecture that there really is, despite Woodhead's pre-resignation rants and selective use of data to con ministers otherwise, no justification for the misery English schools inflict on their pupils through their indiscriminate use of setting and its predetermination of minimal educational attainment for so many. Additionally, tasks such as those described above illuminate the debate concerning the so-called gifted and talented - if all exercises were as purposeful, and exhibited comparable levels of mathematical integrity, then the case for acceleration would be seen for the falsehood it is. All pupils have a right to enrichment. That is, they should all experience challenging, intellectually worthwhile and coherently-structured mathematics.

Paul Andrews, University of Cambridge Faculty of Education. (published in Mathematics in School (2002), 31 (5), by The Mathematical Association )

Here is a printable version of the article.