This article is part of our collection Great Expectations: Probability through Problems. 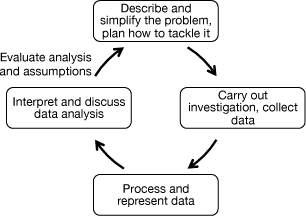 I have just read an article called Up and Down the Ladder of Abstraction.  Reading it, it occurred to me that the process the author, Bret Victor, is describing can also be applied to our approach to the teaching and learning of probability.  He is talking about how designers should consciously move between concrete systems on the ground, and abstract systems described by equations or statistics.

We do the same thing in maths - often called the modelling cycle - and it is one of the fundamentals of our approach to the teaching and learning of probability.

I will illustrate this with our problem Who Is Cheating?  In this problem, we want to explore the results of drug testing on athletes who do (not) take a certain banned substance to enhance their performance.

We start with one simulation, and explore that. 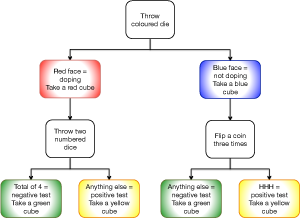 The flow chart on the right (click here for a full size version, or click here for a text version) gives the steps in carrying out an initial simulation.  In the first phase of the simulation, the student takes a blue or red cube depending on the throw of a die.  In both cases, the student then follows the appropriate path in the flow chart, ending up with a pair of cubes, one either blue or red, the other either green or yellow.

It would be a mistake for a teacher to assume that this first experiment is straightforward for all students - experience would suggest that although some will get the hang of it immediately, others will not.  It is therefore good practice with investigations of this nature to do this experiment with the whole class, getting different students to take part.  It is important that all students understand how the process works - so when to use which die/dice and when to flip the coin -  and what it means - first, is the athlete taking the banned substance (red cube if yes, blue if no), secondly is the test positive (yellow cube if yes, green if no).

It is therefore a good idea to do several single simulations, initially using results as students obtain them through throwing the dice and flipping the coins, but then establishing what would happen for all possible outcomes at each stage, if one or more don't happen without intervention.

Questions that could be asked at this stage include: Even if a number of simulations are carried out with the whole class, this is not going to provide adequate data for students to interpret convincingly.  The next stage is for small groups or pairs of students to explore the model for themselves, collecting data over, say, 36 simulations.  We choose 36 because (a) it gives enough data for individual groups/pairs of students to draw meaningful results from their own data, (b) aggregated over an entire class it gives enough data to challenge or provide reasonably convincing evidence for hypotheses that emerge, (c) the analysis of what we might expect to happen is straight-forward.

But before doing that, students should be coming up with hypotheses about what they think the aggregated data is telling them: 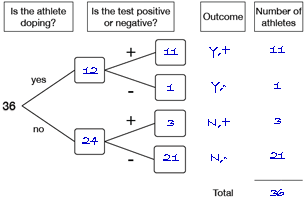 So far, all we have is experimental data. It may provide fairly convincing evidence for hypotheses, but we need to ask the question - is what we think we see simply a random effect, or are we seeing evidence for a genuine pattern which we would expect to see more generally in this experiment?  While it is important for students to do the practical investigation, it is equally important that they are able to move away from practical results to consider what would happen if we could average the results of an infinite series of experiments - ie. what we expect to happen.

Once students have the tree diagram and 2-way table for the expected results, they can focus on questions such as: Students could also be challenged to write a description of the new test - what is its success rate, what is its failure rate?  The challenge here is to take the numerical results and recast them in a form which would scale to, say, 100 or 1000 athletes, and also be intelligible to people reading the description.


This is the point at which students should be encouraged to progress from expected results in the form of proportions, to probabilities.  This is essentially the same calculation, but instead of it being about 36 or 100 or 1000 athletes, proportions are normalised to probabilities - proportions of 1.  The total is then the total probability (1) rather than the total number of athletes under consideration.

This is covered in more detail here.


Sooner or later, students should be encouraged to challenge the rules of the simulation.  Because the experiment makes use of dice and coins, the proportion of athletes in a given outcome at any stage is pre-determined.  How about if we want to be able to change the parameters?

That's where the computer simulation comes in.  Not only can it be used to provide much larger data sets quickly, it can also be used to vary the proportions.  This provides data to explore questions like:
This could lead into consideration of the difference between P(B|A) and P(A|B) - the probability that event B occurs, given that event A has occurred and vice versa.  The latter requires reversing the tree diagram.


In Stages 2 and 3, students were encouraged to move away from the practical experiment, using tree diagrams and 2-way tables to explore the theoretical model, and a computer simulation to explore what happens if the parameters are varied.

It is time to revisit the original problem, and the questions and hypotheses which emerged in the early stages.  Do answers to these need revising?  Can we say more than we could when we just had the experimental results to consider?

Are there questions which have emerged since then?  Can we answer them?

Are there any results which seem bizarre or unlikely?  For instance, it might be possible to vary the parameters so that either the false positive or negative rate was zero.  Is this likely in reality?  Is it ever possible for both to be zero at the same time?


The context for this problem was drug-testing among athletes, but this model could be applied to a variety of scenarios.  Students could be challenged to set up their own probability model, based on a different scenario, and with rules for the initial simulation defined in a different way.


At its most general, this is a problem about two events, A (athletes taking a banned substance) and B (a test for that substance proving positive), and their complements.  The structure of this problem and its analysis could be applied to any context where two events and their complements can be defined, and which make sense in the real world.  Students should generalise their analysis for the scenario of A followed by B, then reverse it for the scenario of B followed by A.

Questions which might then be asked include: At this stage, students will have derived Bayes' Theorem from their analysis.  Can they justify their results?