What's in a Name?

What's in a Name?


Have a look at these two squares of numbers: 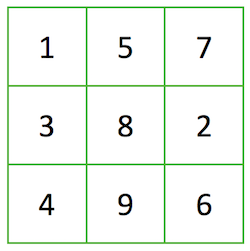 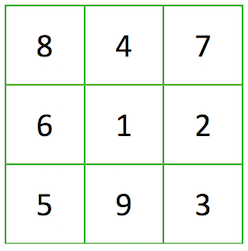 What do you see?

What is the same about the two squares?  What is different?

'Magic' squares are square grids with a special arrangement of numbers in them. The arrangement is special because the numbers in each row, column and diagonal add up to the same total. (We could call this the 'magic total'.) 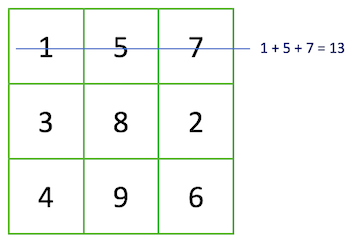 If we add the left hand column of numbers, 1 + 3 + 4, we get a total of 8.
So, we know already that this square is not a magic square as these two totals are different.

Use the numbers 1 to 9 to create a magic square.
Can you find another way of doing it?
And another? And another? ...

What do you notice about your magic squares?

Magic squares offer an opportunity for learners to practise mental arithmetic in a meaningful way.  They will be performing many, many calculations but with a particular goal in mind, as opposed to isolated, repetitive practice. The idea of the square being 'magic' can stimulate children's curiosity and provide the motivation for exploring the mathematics.

Display the two squares and ask children what they see.  Allow them to look in silence first, then give them chance to talk to a partner. Rather than taking any feedback immediately, invite the class to look again and consider what is the same about the two squares, and what is different.  Again, give everyone some silent time before asking them to talk to each other.

Facilitate a whole group discussion which will allow pairs to share their 'noticings'.  Try to encourage other learners to comment and respond, rather than all the conversation going through you. Draw out the common features of the two squares and lead into an introduction about magic squares. In order to clarify what makes a square magic, you could involve everyone in finding out the totals of each row, column and diagonal in one or both of the squares given.  You can then emphasise that both of these examples are not magic because neither of them has a 'magic total'.

Set children off to create their own magic square/s.  Having digit cards available will be useful so that they can try out different arrangements of the numbers easily.  You may also wish to print off copies of this recording sheet, which contains lots of blank three by three squares.

You could give out copies of larger individual three by three grids and ask particular pairs to record one of their solutions on to it.  Pin up all the solutions on the board/wall for everyone to see and, at a suitable point, bring everyone together again to look at them. What does the class notice about all the solutions they have found? This is a great opportunity to talk about same and different.  Although the solutions do look different at first glance, closer inspection will reveal that the same three numbers always appear together on a row/column/diagonal.

Having digit cards available will mean that everyone can access this task through trial and improvement.

Encourage learners to explain why there is only one three by three magic square. This could, for example, involve working systematically to find all the ways of using 1 with two other numbers, all the ways of using 2 etc. and using this to decide where each number has to be placed.
Some children might enjoy exploring four by four magic squares. There are considerably more solutions this time so rather than asking them to find them all, you could suggest that they found some examples.
The NRICH Project aims to enrich the mathematical experiences of all learners. To support this aim, members of the NRICH team work in a wide range of capacities, including providing professional development for teachers wishing to embed rich mathematical tasks into everyday classroom practice.