What's the fairest way to choose 2 from 8 potential prize winners? How likely are you to be chosen? 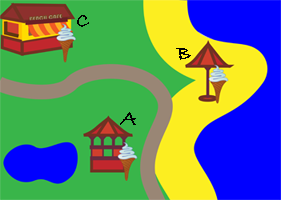 Louis plans to set up a new icecream business by the seaside.  But where should he set up his first stall?

If he sets up shop at the Beach Cafe (C), the weather won't matter.  On the other hand, if he puts his stall on the beach (B), he'll do much better if it's sunny, but much worse if it rains.
He could go for the bandstand (A) instead ...

What should he do?

Put two blue and two yellow cubes in a bag so that the colour of the cubes cannot be seen.


Now decide where Louis should put his first icecream stall.  The table tells you how many dollars he can expect to make per day in each location:


Now pick a cube  How much did Louis make?

See if experiment confirms your choice.
If you work in a group of three, each of you could choose one location and see whose location does best.
You could record the weather each day, then compare the financial outcome for each location day by day, and see which did best over the month.

Which location did best?  Does this surprise you?

Since rainy and sunny days are equally likely in this model, which location would be Louis' best option over a 6 month season?

Now think about the model we have set up: what assumptions have we made?


Business is doing quite well, so Louis decides to invest in another icecream stall further round the beach, where it won't compete with his first stall, and where there are likely to be more people.

There are three locations he thinks might do: on the beach (J), under an umbrella in front of the pier (K), or in a cafe at the end of the pier (L).  He will have to be careful which location he chooses, because some of them will mean he loses money if it rains - although they will also be good earners if the sun shines.  Also, Big Frankie is in charge here, and he has to be paid for letting Louis open a business on his patch - and Big Frankie will expect to be paid whatever the weather.

The table gives Louis' expected income and outgoings per day:


Which location do you think Louis should go for?

Would your decision be different if Louis' business will fold if his total income drops below zero?
Do a running total for a 30 day experiment and see if any of the possible locations mean Louis goes out of business.
You may find this spreadsheet helps with this.

You will need to decide what you're going to do if the first day or two are rainy - does Louis go bust immediately, or do you think he has a cushion from his first stall?


This isn't very realistic, however, so now we are going to make the model a little more sophisticated.

Louis lives in an area where rainy and sunny days are both as likely as each other.  But he notices that if it is sunny one day, it is more often sunny the following day, and if it is rainy one day, the next day is more likely to be wet.

For day 3 and successive days, replace the cube for day 2, and make sure that there are the appropriate cubes in the bag given the weather on the previous day.

Use the cubes to give a weather pattern over 30 days.  How many sunny/rainy days were there?

Compare your results with other groups?  If you average the data across the class, what do you get?
Can you predict what the expected number of sunny days might be over 30 days?

Now extend your tree diagram to a third day.
What is the probability of a sunny day on day 3?  Again, are you surprised?

What does this suggest for the probability of a sunny day on day n?  Can you justify your answer?


Can you think of ways you could improve this model further?