In this maze there are numbers in each of the cells. You go through adding all the numbers that you pass. You may not go through any cell more than once.

Can you find a way through in which the numbers add to exactly 100? 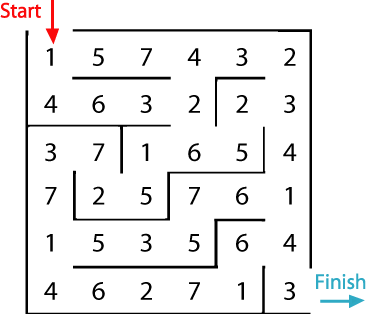 What is the lowest number you can make going through the maze?

What is the highest number you can make going through the maze? (Remember you may not go through any cell more than once.)

This problem uses a maze as a context in which to practise addition and to work in a systematic way. In the past many comics, annuals and 'children's corners' in newspapers had a maze of some sort but they are less common now.  As a result, some children may not have come across mazes like this so they may need some explanation of what to do. Two copies of the maze can be found on this sheet.

Show the maze on screen and then ask the class to watch you carefully.  Don't say anymore, but draw out a route through the maze, one number at a time, and each time you go through a new number, write up the running total on the board.  Do all this in silence until you reach the exit of the maze and have your final total.  Then give learners chance to talk in pairs about what they think you were doing.

Use a whole class discussion to clarify the 'rules' of the task and then challenge them to find a total of 100, working in pairs.  Give some time for learners to work on the problem, then draw everyone together for a mini plenary.  Ask pupils to describe how they are tackling the task.  This will allow some children to articulate their thinking so far, and therefore help to clarify their thoughts, whereas for others it will be a chance to hear what other pairs have done so helping them 'get off the ground'.

Having shared some strategies, walk around the room as children work, listening out for those who are forming reasoned arguments for their route, as opposed to those who are working more haphazardly.  In addition, look out for pairs who begin to 'tweak' solutions to get nearer to 100, rather than beginning again from scratch.

Tell me about your journey through the maze.
How are you choosing where to go next?
What do you notice about the structure of the maze?
How could you adjust your journey to get closer to 100 rather than starting again at the beginning?
How will you record what you have tried?
How is your recording supporting you to solve this challenge?

You could ask questions such as: Pairs of children might like to set their own end totals as a challenge for each other.
Learners could make up an even harder maze than this with these numbers in it.
Mazes can be made any shape and can be based on squares, circles, triangles and hexagons.
Or learners could design a different maze where the numbers were decimals and the challenge was to travel through the maze and emerge with a total of 10.

Challenge learners to find an accurate total for their journey through the maze. Children may like to use a beadstring to help with the addition and help keep a running total.
The NRICH Project aims to enrich the mathematical experiences of all learners. To support this aim, members of the NRICH team work in a wide range of capacities, including providing professional development for teachers wishing to embed rich mathematical tasks into everyday classroom practice.