Six circular discs are packed in different-shaped boxes so that the discs touch their neighbours and the sides of the box. Can you put the boxes in order according to the areas of their bases?

Well done to Tharuka from Doha College in Qatar, who sent in this solution:

The way I will solve the first part of this question is by splitting each part into triangles and rectangles, like below: 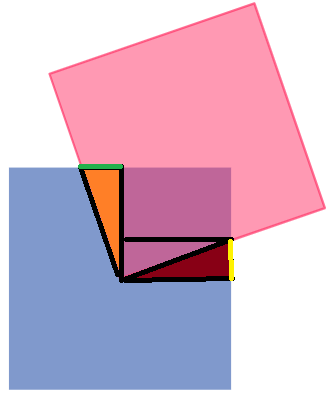 Throughout the question, I will be using the terms a, b, x and y to describe each important part: orange = A; dark red = B, green = x, yellow = y.

The first part states that no matter the orientation, the red square will always take up a quarter of the blue square. I can prove this by using congruent triangles. Triangle A and B have the length of half of the blue square. Triangle A, and the area left behind in triangle B are congruent, so if you were to place the area of triangle A into the space left behind in triangle B, since the length of each triangle is half of the square, you would be able to see that the overlap is clearly the quarter of the blue square. That sounds convoluted but its really as simple as just placing the orange triangle in the dark red triangle.

But how can we make sure that those two triangles are congruent, well let’s turn this diagram into something extremely simple. Look below: 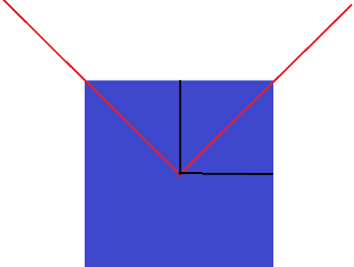 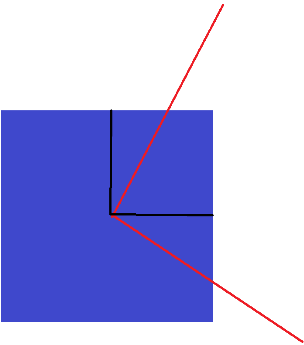 The two red lines are the sides of the red square. We can use the two black lines to check the distance each line moves. The two red lines are at a 90-degree angle, so as one rotates and moves, the other will move the same distance, meaning that the triangles made will have the same sides of their respective triangles and is thus congruent. For some final proof, here is a video of a program I made which shows further proof that triangle a and b are congruent by measuring the size of the line x and y (it’s not 100% accurate but it gets the point across):

In this part of the question, I will prove that the red square must be over half the length of the blue square before the area of the overlap is smaller than a quarter of the blue square. Once again, I will use a diagram to explain this idea: 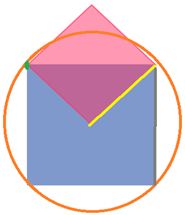 As you can see here, the area of the overlap is the quarter of the blue square. This is because the green dot is outside/bordering the blue line. This means that the orbit is also outside the square. As the red square gets smaller, the orbit gets closer, and so does the green dot. Eventually, the circle and point will intersect the blue square, and as a result the overlap is less than a quarter of the blue square. This is because if we look at the part one of the question, once the points of the red square are inside the blue square, the area made between the edges and the center lines are quadrilaterals, that aren’t congruent and thus can’t be made into a quarter of a square.

This is excellent, except that in this case, $x$ is actually greater than $0.5y.$ Can you find the smallest possible value of $x$ in terms of $y$ (using Pythagoras' theorem)?