We had a large number of solutions and ideas sent in for this activity.

We found lots of patterns in both the triangles and matchsticks. The matchstick columns were all multiples of 3 and each new line added created a total of another multiple of 3. The number of triangles were increasing in odd numbers or adding two each row.

From Brookfield Junior School we had solutions from Lewis, Emma, Jodie, Maddie, Leah, Luke Alisha, Ronnie and here is Bill's:

First column (Ts):
Like we said earlier, we started by counting the triangles. When we reached 16 T we noticed that the number of triangles increase by consecutive square numbers. So we stopped counting and used the pattern we noticed.

1. I made a triangle of four layers of triangles.
2. I recorded some data including:
- number of matchsticks in my four-layer triangle
- the upright triangles
- the upside down triangles
- the total number of triangles.
I repeated this process on a three-layer triangle, a two-layer and a one-layer.
3. I looked for patterns such as the total triangles are triangular numbers but the most important pattern for working out the formula was that the number of matchsticks was three times more than the number of upright triangles.
4 This led me to creating an expression n= number of layers, or if you were to lay the triangles out in height order, it would be the nth term of that sequence. The expression looked like this.
3 (n(n+1))= number of sticks

Taylor from Canberra Grammar School in Australia sent in a document which can be viewed here Taylor .doc

From Martha, Max, Felix, Charlie and Matthe at St Mary's Primary School Chipping Norton we had a good selection of ideas including; 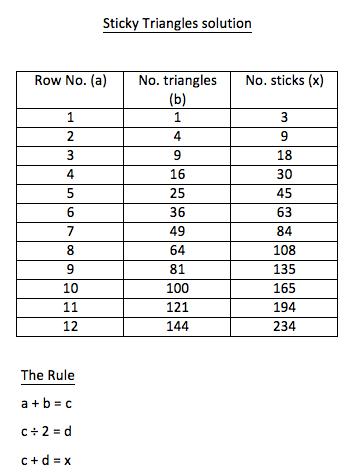 Well done all of those who sent in solutions. You worked well on this activity.
The following solution came in at the end of July 2014 from Mustafa at Redlands Primary School in Reading. 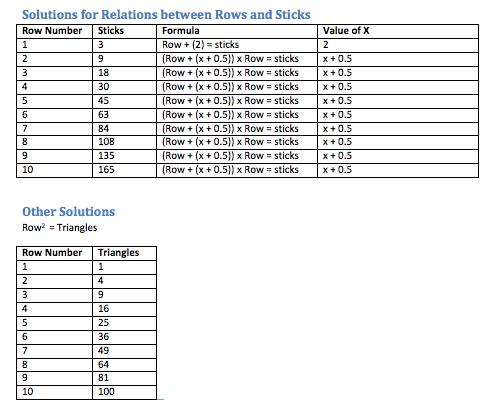