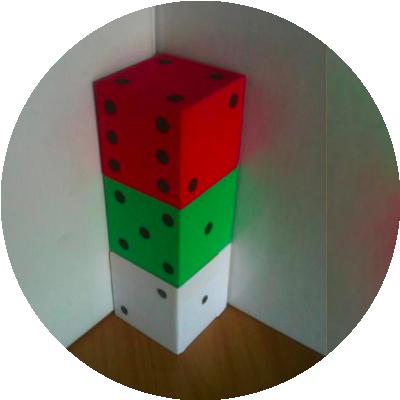 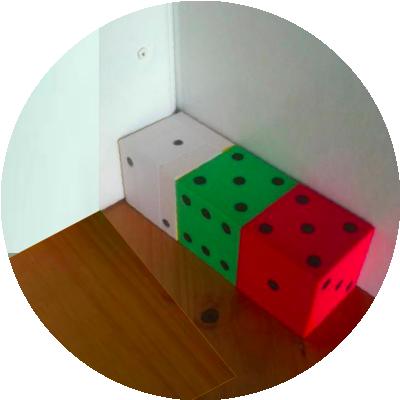 Each line of dice must be along or up a wall (or two walls).  A line going up is counted the same as a line going along. Remember the dice must touch face to face and have the same numbers touching. The lines of dice must be of a single thickness, so this one below is not allowed; 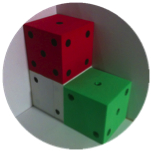 This activity engages the pupils in both a spatial and numerical context and gives them the freedom to choose how they go about it, for example visualising in their head, using dice  and/or making use of a spreadsheet. They can learn a lot from adopting one method and then realising that an alternative method would be better.  This particular activity also lends itself to team work.

It would be advisable to use a corner with large dice to set up the challenge.  (The corner in the pictures was made from three pieces of card.)  It is useful to have three different colours for the dice so that it is easier for the pupils to say which dice they are talking about.

Demonstrate the rule of "like faces facing", and then move the dice around a bit so that the rule is broken and ask if it's ok. Put the dice in the arrangement in the pictures and clarify how the total is calculated.

Before setting the children off on the challenge itself, you could ask them to find the smallest and largest possible totals for a stack of three dice so that they become immersed in the context.

Open questions such as:
Tell me about this . . . .
How did you decide on this approach to finding all the possibilities?

Using four dice, what is the range of different totals you can get?
How many ways are there for the most popular total?
Can you use a spreadsheet to get the results by using formulae rather than just entering data?