Can you mentally fit the 7 SOMA pieces together to make a cube? Can you do it in more than one way?

Can you use small coloured cubes to make a 3 by 3 by 3 cube so that each face of the bigger cube contains one of each colour? 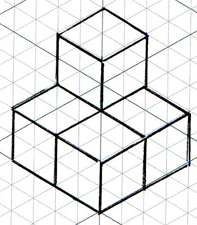 Drawing in isometric perspective preserves:
It does not preserve:

Comparing this isometric representation of the structure with the same structure represented in oblique projection (below left): One advantage of isometric perspective is that relative proportions of lengths are preserved - if lengths are drawn equal, or if one length is drawn twice as long as another, then that is also the case in reality.
A disadvantage is that there is no way of showing a structure from a slightly oblique direction - the drawing above suggests that the structure is positioned symmetrically relative to the observer, whereas the original photo shows the right hand faces facing toward the observer, and the left hand faces facing away from the observer.

One advantage of oblique perspective is the relative ease of drawing a structure using this method.
A disadvantage is that no information from the original structure is preserved.
The NRICH Project aims to enrich the mathematical experiences of all learners. To support this aim, members of the NRICH team work in a wide range of capacities, including providing professional development for teachers wishing to embed rich mathematical tasks into everyday classroom practice.