How Do You See It?

How Do You See it?


Here are some little problems.
How would you put them on paper using
- words?
- pictures?
- numbers?
- objects?
- other ways?

Zoe had these three sweets.

Her friend Rajneet gave her two more. How many has Zoe got now? 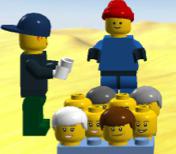 She gave 3 of them to her little sister. How many dolls has Karala got now? 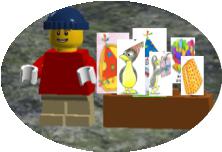 It was Toby's birthday and he had 6 birthday cards.

The postman brought some more cards for him and Toby now has 9 cards.

How many cards did the postman bring to Toby? Some then popped and he only had 5 left that were bright and bouncy.

How many had popped?

Some children were walking to school together.

Now there were 9 children altogether.

How many were walking together first of all?

Marcus had some coins in his pocket.

Sadly he lost 7 of them, now he only

has three coins. How many coins

were there before he lost them?

This activity encourages children to think of different ways of viewing the calculation. Whilst they are doing this the teacher can observe just how their pupils are considering a problem, and this may be somewhat different from the taught approach. Given the opportunity, children often have their own ways of working.

Talk to the children about how different people do things in different ways and explain that this actvity is all about that -  it's important that the children don't presume that there is one way and one way only to see the calculation.
Working within a pair or small group and tackling one problem at a time can help children to focus more deeply on one task rather than racing through them. You could suggest that they think and talk about what they are going to do before they actually begin.
They may decide to enact with objects or make a picture and just record the answer. Or use these as a prompt to transfer the problem to a calculation which they would record horizontally. Whichever, your observations will allow you to reflect on the children's confidence, language and understanding and possibly what misconceptions they hold.
These particular examples are reasonably straight forward. 'How many more than..?' type questions are much more difficult because the word 'more' usually signifies addition but the calculation here is a subtraction. It's worth introducing word problems in this category separately by taking a lesson to focus on them.
There are eight types of change and compare word problems. More examples including the ones that children typically find difficult, can be found here as pdf, .doc. You can read more about this in:
Harriett C. Bebout, (1990) Children's Symbolic Representation of Addition and Subtraction Word Problems,   Journal for Research in Mathematics Education, Vol. 21, No. 2 , pp. 123- 131, NCTM

Tell me how you are working this out.
What do you think of _____'s way of doing this?
How did you know what to do first?
Is the way you've done this differently from the way you do other additions/subtractions?

Ask the pupils to create stories that involve calculations for their partners to do.
Give the pupils a written form of an addition/subtraction eg [] - 5 = 12 and challenge them to create a story around  it.

Some pupils will benefit from working with some small toys/dolls so that they can enact the situation before being able to think about the calculation, for example the final balloon problem might be modelled using Lego figures and counters as the balloons. The physical act of moving objects in different ways (together, away from) can sometimes help less confident children to work out which operation is appropriate.