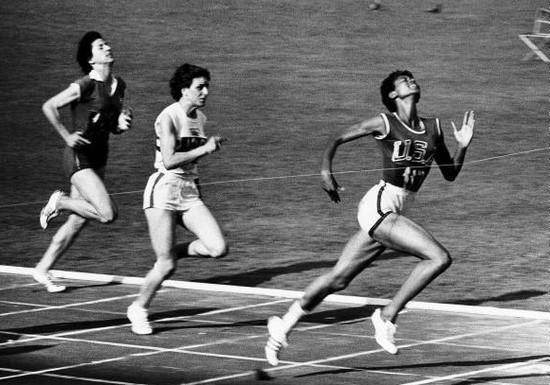 This picture shows Wilma Rudolph from the USA winning the 100 metres race at the 1960 Olympics in Rome. She won the race with a time of just over 11 seconds.

How far can you run in 11 seconds? How could you measure this distance?

Why might the wind speed affect how quickly you can run?

Choose a windy day and run the same distance towards the wind and away from the wind. Which is easier? Why? 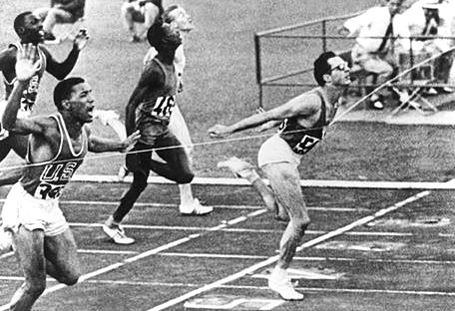 The picture to the left is from the same Olympic Games in Rome in 1960. Livio Berruti from Italy won the 200 metres race in 20.5 seconds, which tied with the world record at the time.

How far can you run in around 20 seconds? How does your distance compare to the 200 metres race?

All six athletes in that race finished in less than 21 seconds, so there was less than half a second difference between the times of the fastest and the slowest athlete. 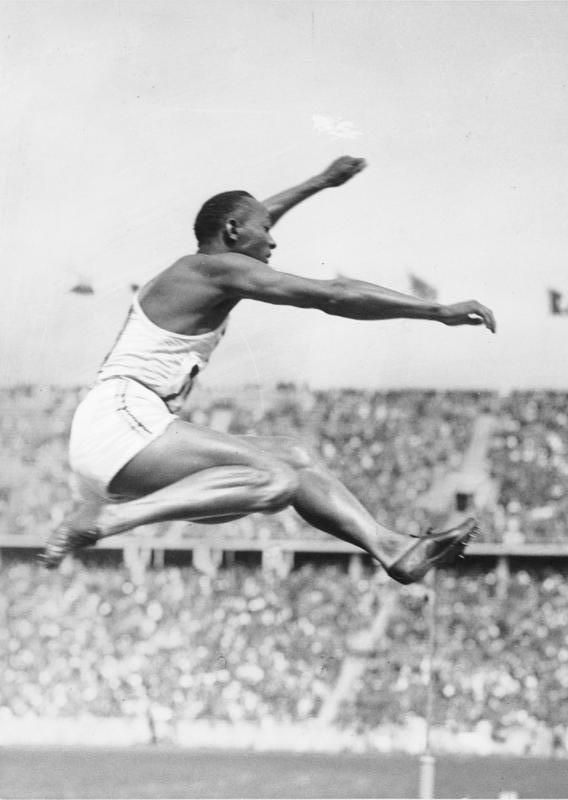 This picture shows Jesse Owens from the USA at the 1936 Olympics in Berlin, where he won a gold medal for long jump. This is a running jump, and his winning jump was just over 8 metres.

How far can you jump if you have a run-up?

Jesse Owens didn’t manage to break the world record with his jump – but he was the person who had set that world record the previous year! On one day in 1935, he had managed to set three new world records for the long jump, the 220 yards race and the 220 yards hurdles. (220 yards is approximately 201 metres.) 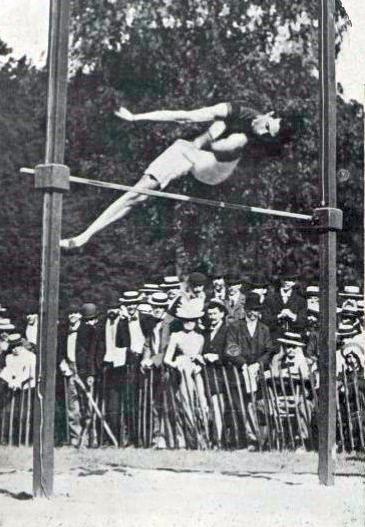 This picture shows Irving Baxter from the USA, who jumped 1 metre 90 centimetres in the 1900 Olympic high jump in Paris. He set a new Olympic record but didn't quite beat the world record of 1 metre 97 centimetres.

How high is 1 metre 90 centimetres?

The high jump world record has been beaten a lot of times since then, and some new high jump techniques have been developed over time which help people to jump higher and higher. Have a look at some pictures of people competing in the high jump at the last Olympics and see how their techniques look different from Irving Baxter’s technique in this picture.

The photograph of Jesse Owens was taken by an unknown photographer and is reproduced under a Creative Commons license. The other photographs are in the public domain.

This activity looks at some historical Olympic results and asks children to think about whether they could do something similar. It introduces ideas about measuring time and distances in standard units.

Talk to the class about the Olympic Games and their history both in modern and ancient times. Talk about the ideas of winning and competition, and discuss the concept of a world record. When is a world record set with a higher number and when is it set with a lower number? If the children don't bring this up themselves, draw their attention to the face that the winner is generally either the athlete with the longest distance (in some sense) or a shortest time.

Encourage learners to consider ways of measuring their distances and times, and provide an opportunity for children to try the activities suggested and record the information about what they did. You may want to ask the learners to make predictions before they try the activities - how far do they think they could run in 11 seconds?

At the end of the activity, discuss how the pupils' distances and times compare to the ones in the activity. Children are often most confident with saying how many seconds longer or metres shorter their time is, but you might also want to encourage them to consider their results as a ratio - can they jump a quarter of the distance of the athlete's jump? Did they take three times as long to run the 100 metres? This will enable them to see e.g. how many times faster the Olympic athletes can run compared to people who aren't Olympic athletes.

Children could move on to timing each other as they do different tasks and create their own sports competitions deciding on rules for winning. They might also be interested to look at how the world records have changed over time, and think of reasons why world records are being continuously broken.

Some children will need a lot of help to measure lengths and times accurately. Using them in a real context can help them to understand the meanings of the numbers on the tapes and on the clock.

The task Can You Do it Too? offers a similar opportunity, but in the context of measuring distance using non-standard units.