How Would We Count? 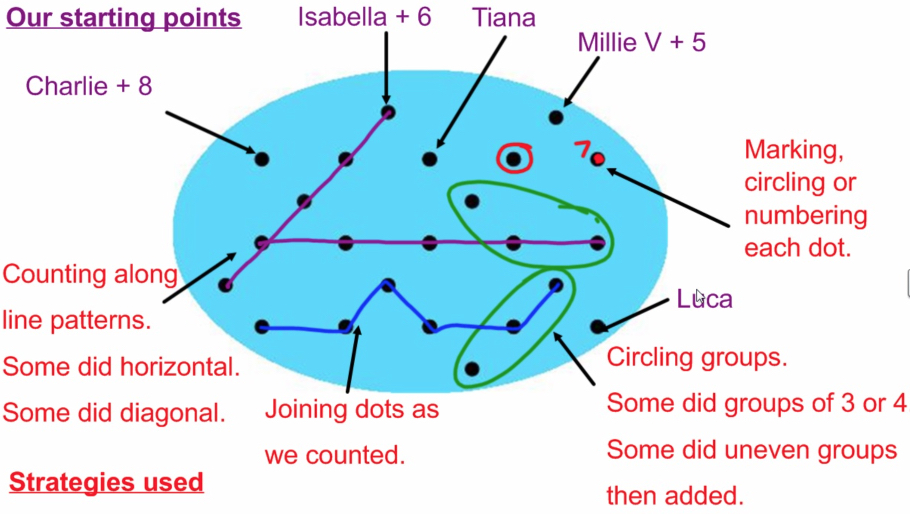 We found that we chose different starting points. Most of us started at the top somewhere but Luca started in a different place and then counted in diagonal stripes.
We also found that we had lots of different counting strategies. Some people counted in lines. Saoirse said, "I started in the left, top corner and kept going right, then went to the next line on the left and went right and kept doing this until I got to the bottom. This way I didn't miss any out."
Ishan drew diagonal lines and said, "I counted in lines because it's easy to see the lines and I started at the first lonely dot."
Some people joined the dots as they counted. Isabella said, "I drew a trail and then I put a number next to each dot and I ended up with 23."
Some people circled groups.
Some used multiples that they could count easily but others circled uneven groups so that it was easier to count a few at a time. Charlie said, "I drew around some so it does not look confusing." Rosie said, "I counted it in groups and I put circles around and then I added them up. 13 + 3 + 7 = 23."
Alphonsa said, "I did 7 x 3 because I know what the answer is and I know that 21 + 2 is 23." Some people marked or numbered the dots as they counted. Darcey said, "I labelled the dots and that told me the answer which was 23."
After we had shared our ideas, we tried one of the other dotty patterns using someone else's strategy.


Ayati and then Advika from Forest Park Elementary USA sent in the following: 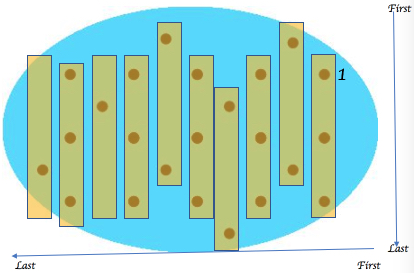 This is the image of dots we were supposed to count. I counted these dots in vertical columns from top to bottom and right to left. 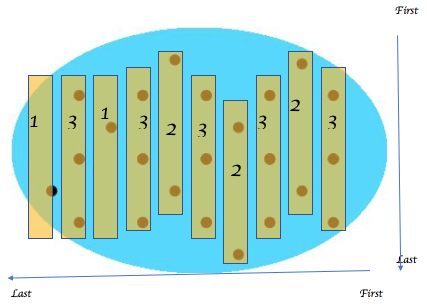 Look at the dot I have labelled 1. That is the dot I started counting from. From there I began counting downwards and when that column was finished, I marked how many dots there were in that column before moving on to the one on the left. I continued to repeat this process ending up with this.


I then added these numbers to get ...  23.
The reason I used this method, is because it is easy to use, systematic, quick and efficient while reducing the likelihood of error. It also has clear logic behind it instead of guesswork. Of course, this method works with rows or diagonal stripes as well, I chose to use columns. 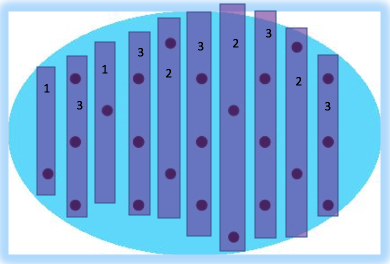 I counted the dots in many ways to clarify my answer. Some of them are listed below:

The diagram shown on the side is a way I would count the dots. I would place rectangles in straight columns to count how many dots there are altogether. 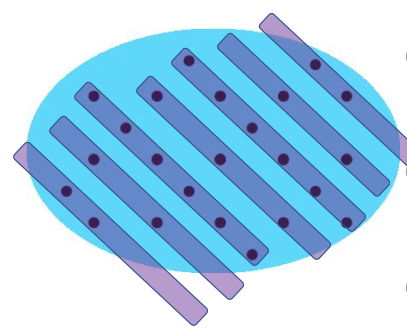 I did the same thing in this one, except the box’s orientation was different. The top one and this one are pretty similar and I find it easiest to understand. Some people may disagree with me, but everyone is entitled to their own opinion.
 


Listed below are some ideas why I think my method is efficient while not requiring a lot of time to complete and check. Some people may disagree with me, but I still feel it is a good method. There is still a plethora of methods that I have not mentioned in this answer. Some people may find other methods better.
Pros of using my method:- Easy to understand; Systematic; Quick and efficient; Not a lot of room for error.
The overall answer that I received every time I did this problem was 23 dots.

Amy from Luckwell Primary School sent the following in which she describes what she did and the ways her classmates counted the dots:

I counted the dots by starting from the left and, with my eyes, grouped them into threes, counting up in threes as I went. My answer was twenty-three. I then checked it by again, grouping the dots, but in fours this time. I got twenty-three again. Therefore, I was 99 percent sure there were twenty-three dots... I checked one more time and got twenty-three again. Now I was 100 percent sure.
Next, I turned to face my friend Elsie. She started counting the dots in ones but ended up counting them in twos. As an afterthought, she said that an easier way to do this would have been to count them in fives. Hmm... a bit different to me then...
After that, I walked across the classroom to another Amy. She counted them in rows.
My friend Rosie counted them in fives. Genevieve counted them in lines. Summer worked from the top and checked several times. Darcy also worked from the top. Danny counted them in columns but wondered if it was a trick question and the blue circle counted as a dot! Kizzi lost count several times but got to the answer eventually. Ria counted them diagonally. Finlay covered a dot with paper once he had counted them. James counted them in columns.
Otto counted in rows. Solomon got 26 first but ended up with 23. He counted in fives and ones.
Jacob counted them in ones. Hollie counted on her fingers. Katie counted in rows. Katie G counted in columns. Ms Winter - my teacher - counted them diagonally.  Leo counted diagonally but got the wrong answer. George gave up. Nell counted diagonally in rows and columns. Ellis counted in twos. Mason counted diagonally. Fletcher started from the right but got the wrong answer. Luke counted in columns and then counted the rest. Evie counted in rows. Tomos started from the left and counted in columns. Alana counted in rows.
Lots of different ways to count dots! What we also puzzled over was the blue circle was round like a dot... We said it wasn't - but maybe it was a trick question and it was meant to catch you out! Maybe we'll never know...
I wonder what the best way to count dots is? Most of my classmates counted in rows, columns or diagonally, but there were a couple of other ways scattered in there too...
What one of my classmates did (James, after I had finished the survey) was to try to count the dots again but using a different method. He enlarged the screen so it was 4-6 dots per page. Once he had counted the group that was on the screen, he scrolled across and counted the next. Hmm - okay but not the most efficient way...
What do my classmates prefer: Counting in rows, columns, diagonally or other?
Rows=6. Columns=6. Diagonally=7. Others=6. Ooh, close! The winner was diagonally but only by one vote. Who knew there would be so much puzzling over a bunch of dots?

I noticed that they were grouped in 5 like on a dice so I could count them very quickly.
The NRICH Project aims to enrich the mathematical experiences of all learners. To support this aim, members of the NRICH team work in a wide range of capacities, including providing professional development for teachers wishing to embed rich mathematical tasks into everyday classroom practice.