How many faces can you see when you arrange these three cubes in different ways?

This activity proved to be a little tricky for many pupils so maybe some more thoughts need to be given about external and internal angles. What also made it harder was asking for some suggestions about proving the solution offered.

However, from Rebecca at the  Baden Powell School in the UK we had this really good solution sent in.

If she went round every angle once when she went round the last angle she would be facing the way she started. She could also do this with a square or rectangle. 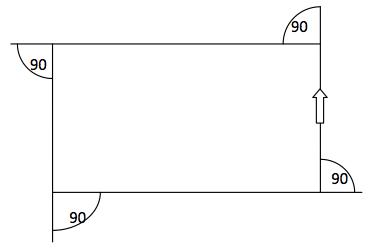 It also works with any triangle, because she always faces the same way when she gets back to the start.

All shapes outer angles will add up to $360°$ because Brenda always faces the same way when she gets back to the start.

From Sooyoung  who said they went to GCMS  which I assume is Gosforth Central Middle School in the U.K.  we had the following interesting suggestion:

If you shrank the hexagon as small as a dot, the exterior angle would look like a rough circle which has 360 degrees altogether.

Sophia  at Towcester C E Primary School send in this thought of hers:

So, thank you for those and I hope that there wil be even more learning about angles and shapes for us all.