Sketch the graph of $xy(x^2 - y^2) = x^2 + y^2$ consisting of four curves and a single point at the origin. Convert to polar form. Describe the symmetries of the graph.

This polar equation is a quadratic. Plot the graph given by each factor to draw the flower.

Often when we want to indicate the position of an object, we refer to its distance and direction. We can use a coordinate system based on this, giving the distance from an origin and a direction as an angle measured anticlockwise from the horizontal.

Here is a map of Scotland. 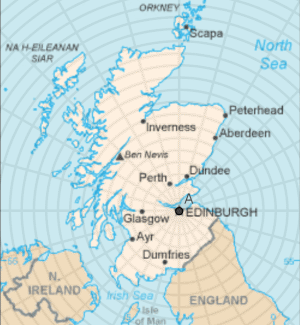 The grid on this map measures from an origin at Edinburgh, and the lines indicate distances from Edinburgh at 20km intervals. 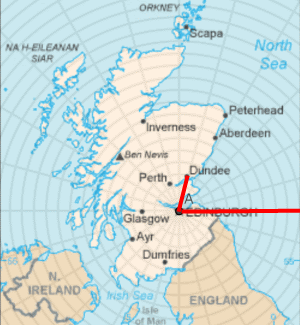 Dundee is to the north and slightly to the east of Edinburgh. I need to travel a distance of approximately 60km in a direction $\frac{5\pi}{12}$ anticlockwise from the horizontal.

The distance coordinate is usually called $r$, and the direction is $\theta$, so a polar coordinate pair is $(r, \theta)$.

Can you express the position of some other places on the map using polar coordinates?

By giving a functional relationship between $r$ and $\theta$, we can represent curves on the polar coordinate plane. Can you sketch the following functions?

Here are some sketches of curves. You can choose where to put the origin.

Are there any graphs where you could easily use either coordinate system?
If the origin had been specified, how might it have affected your decision?

Try to find functional forms, in either cartesian or polar coordinates, to create graphs that closely resemble those above.

You may wish to use graph plotting software to help you; some useful graphing tools can be found here.

You can read more about Polar Coordinates in this article.
Earth Orbit is a challenging problem about orbits that shows the real-life applications of polar coordinates.
The NRICH Project aims to enrich the mathematical experiences of all learners. To support this aim, members of the NRICH team work in a wide range of capacities, including providing professional development for teachers wishing to embed rich mathematical tasks into everyday classroom practice.