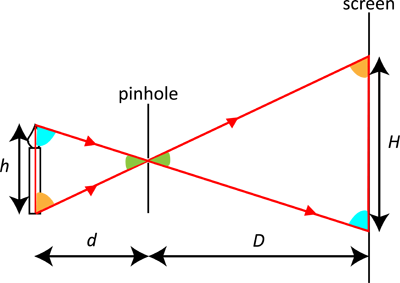 The diagram shows an object (a candle), the pinhole and the screen.

The candle has height h, and is a distance d from the pinhole.

The pinhole is a distance D from the screen.

The image is height H on the screen.

The red lines show the path of rays of light from the candle to the image.

You should notice that the image is upside down - can you see why?
As the length D is increased (keeping d constant) the height H should increase proportionately.
(Imagine what would happen to the rays of light if you moved the screen away from the pinhole.)
If you draw a graph of H against D it should be a straight line.

Because the two red triangles are similar, the sides and the heights of the triangles are in proportion, so:
$$ \frac{H}{h} = \frac{D}{d} $$
This can be rearranged to give:
$$ H = \frac{h}{d}D $$
Drawn as a graph, with H on the vertical axis and D on the horizontal axis, provided h and d are held constant, this should give a straight line through the origin, with gradient h/d.
The NRICH Project aims to enrich the mathematical experiences of all learners. To support this aim, members of the NRICH team work in a wide range of capacities, including providing professional development for teachers wishing to embed rich mathematical tasks into everyday classroom practice.