I was looking at the number plate of a car parked outside. Using my special code S208VBJ adds to 65. Can you crack my code and use it to find out what both of these number plates add up to?

Can you follow the rule to decode the messages?

Asma and Atif were sorting through some things that had been brought in for the school jumble sale when they found an old case with a combination lock on it. 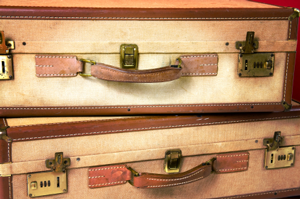 They had no idea what was in it but it was quite heavy and they wanted to find out what was inside. The only clue they had was a sticker next to the lock which said T16 and that there were three digits to find. What did the code mean? What was the combination that unlocked the case?

This problem offers children a way in to exploring coding. It is a fairly straightforward problem that would offer the children the opportunity to explore different sequences of numbers and how they might be coded to describe them.

Getting a combination lock and setting up the problem with a real code to crack might also be a good and motivating idea whether that lock is on your bicycle or on a case. You could even put some follow up mathematical tasks in the case for the children to go on to once they had got into it. Although the idea of finding the combination is not a new one, our ideas for this problem were stimulated by a recent, similar problem offered by Andrew Jeffrey in his newsletter.

How many digits do we need to find?

What code might you choose for your own combination lock? Why did you choose it? What was the process of creating the code?

Children could play with creating their own codes to identify numbers by offering a code in a variety of different ways. The children might come up with a range of possible answers and the reasoning process about the sequences would be as valuable as finding a solution. So T16 might be 320 if the sequence they thought of was the multiples of 20. The one we had in mind was the sixteenth triangle number. Triangle numbers are built up by adding one more each time so T1 in our code is 1, T2 is 3, T3 is 6. The sequence arises as the solution to some classical mathematical problems such as the handshake problem and also by creating triangular patterns of dots.

What other codes might you invent that would identify the number for the combination?

More straightforward examples of coding could be suggested such as taking the number in the code and subtracting 4 so that 485 would be encoded as 481 or taking series of multiples such as multiples of four in which case F7 might be 28.