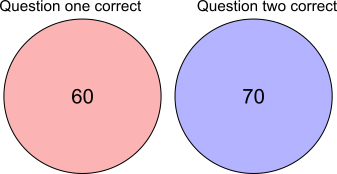 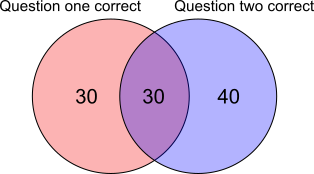 But 9 people got both questions right, so there should only be 9 in the overlap, not 30.

But we know 9 pupils correctly answered both questions - so 9 pupils is the same as 30% of pupils.


Working out the parts not in each circle

Start with the Venn diagram on the left.

60% answered question one correctly, so 40% did not. This is filled in on the Venn diagram below on the left - they go in the red circle because noone got both questions wrong. Venn diagram one on the right shows the same information derived from question two - 30% of pupils did not answer question two correclty.