Observing the Sun and the Moon

How does the time of dawn and dusk vary? What about the Moon, how does that change from night to night? Is the Sun always the same? Gather data to help you explore these questions.

Make your own pinhole camera for safe observation of the sun, and find out how it works.

The following downloadable sheets may be useful:

Can you make a model of the solar system, so that both the sizes of the planets and their distances from each other and the Sun are all to scale?

This is not a straightforward problem, since although the planets are very big, their diameters are much, much smaller than the distances between them and the Sun. 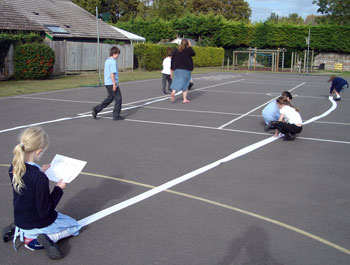 The unrolled toilet roll will represent the distance from the sun - to be placed at one end - to the outermost planet.

Hint: Pluto is now classified as a dwarf planet rather than a planet.  If you include it, you increase the distance you need to work with from 4,500 million km to 5,900 million km.  It is probably best not to include it!

Scaling the distances in the solar system 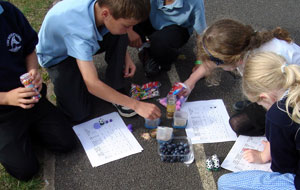 Use this table to help you decide how you are going to make your model.  You could:

Or you may have your own ideas about how you want to scale your model.

Mark where each planet will go on the toilet roll.

Using the data in the table, start by putting the planets in order of size.  Then pick objects to represent each planet.

Put the objects in the right places on the toilet roll.

If you can, decide on a scale which will allow you to represent both the distances and the diameters of the planets.  Find a long enough roll of paper (perhaps two or more toilet rolls stuck together), then either find suitable objects for each of the planets, or make them from modelling clay, papier mache, or similar.

If there isn't room to do this, you will need to agree that your planets and distances have to have a different scale.  So how will you scale the size of your planets?

If you make your own planets, find out what colour they appear to be, and paint them.

Working with your model

Make a colourful poster for each planet: more information about the planets.

Or you may have other things you want to find out about the planets which you could include.

With thanks to the 'Don't Try This At Home' Club Fowlmere Primary School, Cambridgeshire for letting us visit them and take photos.