We had a few solutions come in for this activity, some just sent in pictures of the result but here are the ones who wrote something about their work.

Keanu and Seo from Bandung Independent School in Indonesia told us:

This was a fun challenge for us! First, we put the 'normal' numbers in a row because we could recognize them. We both learn Chinese, so the Chinese numbers were easy to match with the regular numbers. 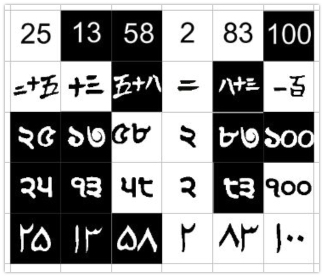 When I looked at the problem I found it very tough but when I started observing the numbers I found a few single numbers and a few three-digit numbers so I observed single-digit numbers and found 2 in all scripts.
Then I moved on to three-digit numbers. I realized that in one script there are three numbers with three digits. I found it bit tricky then I figured out 25 from 2, then 58, 83, 13. Then the left over number is 100.
For other scripts I tried 13 from 100. With 13 I found 83 and from 2 to 25, then 58.

Sahasra sent this picture too: 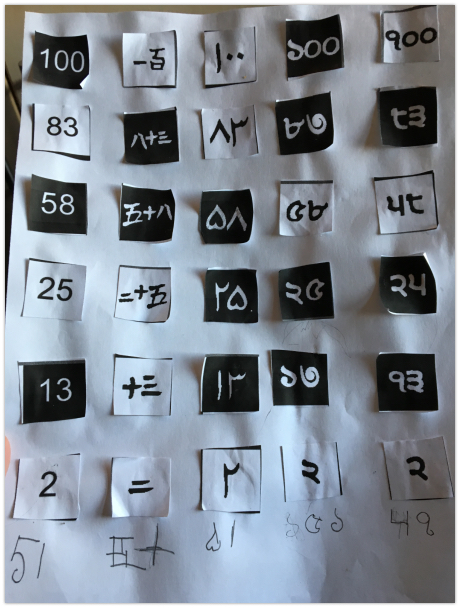 Celesta and Janelle from Portage Central Elementary in the USA sent in the following with the solution:

We used the knowledge of my friend Janelle since more than a few were written in Chinese. The few that were not in Chinese or written 'normally' were harder, but we used our knowledge of numbers to help us correspond the symbols with other numbers.
Thank you for these.  Remember, please try to say something about the methods you used when you send solutions to us.
The NRICH Project aims to enrich the mathematical experiences of all learners. To support this aim, members of the NRICH team work in a wide range of capacities, including providing professional development for teachers wishing to embed rich mathematical tasks into everyday classroom practice.