There are six numbers written in five different scripts.

Can you sort out which is which?

[Thank you to the SMILE Centre for permission to use this puzzle.]

This problem consolidates understanding of place value in a demanding but intriguing context. In order to tackle the problem, learners will have to organise and sort the information given. We hope they are curious enough to keep going, even when it gets tricky!

Show the image of the numbers to the group and ask them to talk to a partner about what they notice. Gather some suggestions and explain what the image shows, if this has not already come up in discussion. Invite learners to suggest ways of beginning the problem and then set them off in pairs to work together, using this copy of the image and providing squared paper.


As they work, encourage them to develop a good way to record their findings.


In the plenary, it might be helpful for you to enlarge this sheet and cut out the numbers so they can be moved around on the board. (If these were laminated, they would make a useful set of cards to be used again.) You could invite pairs of children to explain how they reached their conclusions and recorded the results. This could lead into a discussion of the place value system (compared with, for example, Roman numerals).

Which numbers do you know?
Can you see any similarities between any of the numbers?
Which numbers are the 'shortest' and the 'longest'?

Learners could write hints which might help others work on the task without giving away the solution. You could also encourage children to find out the name of each script.  Another idea would be to include Roman Numeral versions of the numbers:  XIII, II, LVIII, XXV, LXXXIII, C.  This sheet includes six cards which could be printed off to accompany the original numbers.
Alternatively, challenge children to create calculations and their answers in one of the scripts.

Some children may find it useful to cut out the individual numbers so they can be sorted more easily.

Below you can see some pictures of children at Lancasterian Primary School in Haringey working on this task: 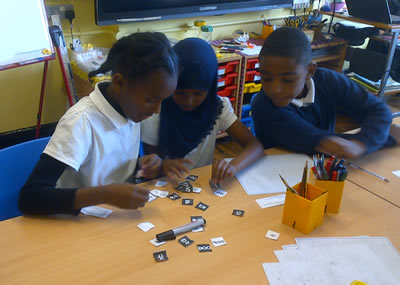 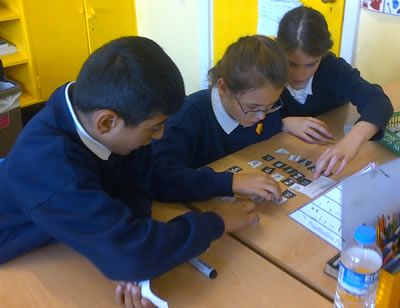 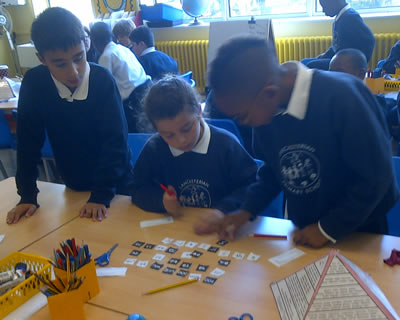