Let's all go down to the favourite cafe that sells ice cream which you choose from different tubs.

There is just one rule about what you can choose, and here it is:

YOU CANNOT CHOOSE A SELECTION OF ICE CREAM FLAVOURS THAT INCLUDES TOTALLY WHAT SOMEONE HAS ALREADY CHOSEN!

This means that if someone has chosen Banana and Citrus I cannot then go and choose all three but I could choose to have Apricot on its own. 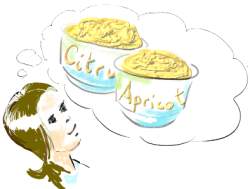 Tim, the second child chooses Banana and Citrus [this obeys the rule because Sarah's choice was not Banana on its own nor was it Citrus on its own].

Matt, has to be the last child because he can only choose Apricot and then there are no other choices left.

In this example, with these children making these choices, only five children can have ice cream [using our rule].

But suppose more children wanted ice cream and so they got together to work out how this could be done.

[I'm using the short-hand this time of A B C where A is Apricot, B is Banana and C is Citrus.]

So seven children altogether. I think that the children can have different sized scoops so that even if they only have one flavour they have as much ice cream as someone choosing three flavours!

If these children weren't very good at working things out they could come up with the worst way; that would be like this:-

Mind you I think that there are other ways of getting seven.

Have a go and find all the different ways of having seven children getting ice cream. Remember that when someone goes up and makes their choice they have to obey that rule:

YOU CANNOT CHOOSE A SELECTION OF ICE CREAM FLAVOURS THAT INCLUDES TOTALLY WHAT SOMEONE HAS ALREADY CHOSEN!

I wonder what would happen if ...?

Please send in any results that you get along the way. I have to go - my mouth is watering for some ice cream!

This activity , when done practically, usually gives great excitement and leads to an extensive discussion as learners try to explain their reasoning to one another. The activity also opens out the possibility of pupils asking “I wonder what would happen if . . .?”. I have found that this activity as well as allowing pupils' curiosity has readily shown their perseverance and resilience.

You'll probably get the best discussion and thoughts from the pupils if you 'act' out the situation. You are the ice cream vendor with a selection of cards, counters, cubes etc. to represent the ice cream. Make sure that the class can see the choices that the previous pupil(s) made and encourage them to check if they've kept to the rule, helping as little as possible. You will probably witness a lot of quizzical enquiry (which acts as a catalyst for perseverance)


Once they have got the idea, invite them to work on the problem, perhaps in pairs. Allow them to make their own decisions as to the equipment they use and the way they record - sharing these can be just as valuable as sharing solutions.


This activity would lend itself to a display and so you may want children to work on large sheets of paper which could be the stimulus for a plenary and could then be put straight up on the classroom walls. You could invite some children to explain how they have found different ways of seven children having ice cream. Draw attention to those who have found a systematic way of finding solutions.

Why did you choose that flavour?
Is there a way of choosing to let more pupils have a choice?

As the problem suggests, the thinking can be extended by looking at larger numbers of flavours.

From the "Possible Extension" the challenge would be to find a general formulae that would take into account the number of flavours and how many scoops were alloed each time to produce the largest numbers of hungry ice cream addicts who could have their fill. Then there would be the need to prove it to be correct. ( A sure example of perseverance!)

This problem is a good context in which to try to stand back and encourage pupils to support each other and explain ideas themselves. Working in pairs might be an appropriate way to support this.