Working on this problem will give students a deeper understanding of area and perimeter, and how they change as a shape is altered. The problem will address some students' misconception that as area increases, perimeter must necessarily increase too.

Display a simple shape made out of squares on a small square grid: 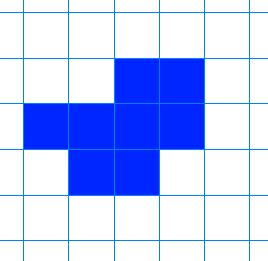 "On your squared paper, shade in squares to make a different shape with the same area as mine."
"My shape has a perimeter of 14. Does anyone else have a shape with a perimeter of 14?"
Collect any examples and display them.
"Does anyone have a shape with a perimeter less than 14?"
Again, display any examples.
"Does anyone have a shape with a perimeter greater than 14?"
Once more, display any examples.
If there are no examples for any of the categories, challenge them to find suitable shapes.
"Area and perimeter are two attributes of these shapes. On this picture the robots have been arranged according to two of their attributes. Can you work out how they have been arranged?"
Draw out the key ideas:
As you go from left to right, the width of the robots increases.
As you go from top to bottom, the height of the robots increases.
All the robots in the middle column have the same width.
All the robots on the middle row have the same height.
Now display this picture to summarise what they have (hopefully) noticed and to introduce the type of grid the students will be using for the rest of the problem.
"We could arrange shapes in a 3 by 3 grid in the same way, sorting them by their area and perimeter instead of the height and width."
Give each pair of students the cards for the first part of the problem, display the grid on the board and ensure that students understand what they have to do: 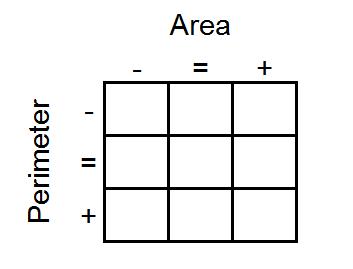 As each pair finishes, they can be given the second set of cards to work on in the same way. For those who finish quickly, ask them the question from the problem about extending the grid like this: 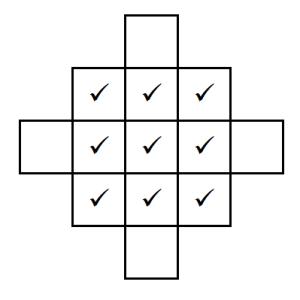 Towards the end of the lesson, bring the class together to share any efficient ways they found to compare areas and perimeters without having to work them all out.

In sharing feedback on the first activity, ask students what they notice about the shapes on the top row of the grid.

To explain why all shapes drawn by cutting corners out of a 4 by 4 square have a perimeter of 16, these images might be useful:

"How much perimeter has been lost by cutting out the pink rectangle? How much has been gained?"
Shapes on the second and third row can be compared in the same way.

For the second activity, we want students to recognise:
"Rectangles that are closer to squares have smaller perimeters than long thin rectangles with the same area"

One prompt that could draw out this thinking might be:
"If two rectangles have the same area but different perimeters, how can I decide which has the greater perimeter?"

Finally, discuss the possible content of the four extra spaces in the extended grid, focussing in particular on why some of the spaces are impossible to fill in.

Area and Perimeter provides a good starting point for the thinking expected of students in this problem.

Finally, students could be challenged to create their own set of cards with a $1$ by $5$ rectangle as the central card. This forces them to consider rectangles whose side lengths are not whole numbers.

Changing Areas, Changing Volumes explores in a similar way the relationship between volume and surface area of different cuboids.