I once made a school visit in just about the heaviest rain I've ever experienced. It came down with such force that it made you wet twice, once on the way down and again as it bounced up to waist height. It continued just as hard throughout the first half of the morning, and as morning break neared a deputation of worried-looking Y6 girls approached the teacher. "Please, miss, you're not going to let a few drops of rain stop our rugby practice, are you?" 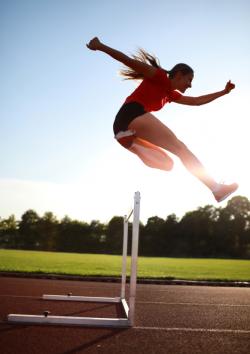 As the Olympics get closer and closer it seems to me that one of the healthiest developments in recent years has been the increased opportunities for girls to participate in sport. I've recently been doing One-To-One tuition in the middle school I taught at 25 years ago. Of course the new buildings and the computer rooms are a fascinating contrast to the days when our computer was a Sinclair ZX81, but in 1985 a girls' football team was just as much pie-in-the-sky as a computer suite. The 2011 version is that we had to modify the timetable because one of my pupils wasn't prepared to miss her football practice.

Going back even further in my own experience, I spent the first couple of years in secondary school as a boarder, and we'd spend hours simulating our own Test Matches. All you needed was a pencil and an exercise book, and if they'd ever thought to look, my teachers would have been amazed by that exercise book. To call my exercise books in mathematics untidy would be to flatter them generously - crossings out, ink blots, wrong answers and very few correct ones.

What a contrast there was in the appearance of my Test Match book - each game would take several days to play and there'd be perhaps 3000 separate pieces of information all impeccably and accurately recorded. On reflection there's no great insight needed to explain why I might have been at the bottom of the class in mathematics lessons and yet able to call upon all the mathematics I needed to explore sporting situations - I spent two weeks in the sick bay and was perfectly happy that my only company was an old copy of Wisden Cricketers' Almanack.

A good stimulus can do much more than simply encourage children to work with a bit more enthusiasm. It can unlock levels of performance way beyond all expectations. I joined a Y6 teacher using a computer package about Grand Prix racing called "Cars - Maths In Motion". Now to my mind Formula One has not one single attribute that qualifies it as a sport, but I don't mind admitting that motor racing does nevertheless stimulate some fine games. The package wasn't about cars whizzing around; indeed, there was no graphical component at all. Instead, children had to prepare a car for a race, making the best compromise between speed, power, brakes, etc, and to do this they had to do a vast amount of work involving estimating, decimals, and percentages.

The work lasted for several lessons, and the teacher told me that at one stage a visitor joined the class. She was unconvinced by the teacher's claims that a computer game about motor-racing was contributing to the pupils' mathematics and their understanding of percentages. The visitor buttonholed a child at random, choosing someone who was by no means a star in the class.
"What's 92% of 228?"
The child looked puzzled, and the teacher's heart sank.
"Go on Claire", she said, "I know you can do it. What's the answer?"
"About 209, I suppose", muttered Claire nervously.

The visitor sat down to do some calculations on a piece of paper and several minutes later came up with a similar answer (the exact value is 209.76). When the visitor - somewhat more satisfied - had left, the teacher asked Claire why she hadn't given the answer immediately.
"It seemed too easy", she said, "I thought there must be a catch"!

This was, incidentally, another occasion when girls surpassed my rather bigoted expectations. Not only did two girls win the race, they overtook a further pair of girls whose car ran out of fuel on the final lap, and another girl left her sickbed not to miss the race. There are few computer packages which have been unsurpassed for more than twenty years, and you can find out more about this one at Maths In Motion Challenge for Schools. 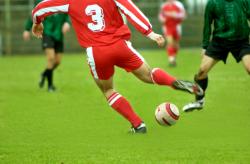 A little while ago I visited Arsenal Football Club's Double Club initiative. Arsenal-sponsored teachers are linked with local schools and teach lessons in basic subjects. The lessons have football-linked themes and the Arsenal teachers offer additional football lessons. I'm as keen on football as anyone, but even I could recognise there might be some downsides, so I visited with at least a small amount of scepticism in my mind. I certainly recognised benefits - the pupils, many of whom had histories of little academic success, were enthusiastic and had a real commitment to the work. The DCSF evaluation (ref DCSF-RR101, ISBN 978 1 84775 422 6) was carried out by NFER, and reports:

"It is having a positive impact on pupils' motivation and self-esteem, with young people reporting that they work hard in DC sessions and that they feel more confident and able to contribute in their other lessons. This report presents some data on attainment, which indicates that young people attending DC make good progress in basic skills. Pupils and teachers perceive the programme very positively, seeing it as an opportunity for lower-attaining young people to get additional support with their learning. The programme is viewed as engaging, motivating, well considered and adaptable."

Whether or not you want to build your teaching around football there seems a clear message here. Pupils who might not normally be motivated towards basic skills work were prepared to work hard because the work was presented in a way that they could relate to.

Yes, I do think the Cars - Maths In Motion program is a terrific stimulus, but I'm equally sure that perfectly ordinary ideas also can have significant effects. Back at my middle school of a generation ago the sports staff were so committed to athletics that I was convinced that they taught the children far more about decimals and measurement than the entire mathematics team. Equally, one lesson I drew from my Double Club visit was that the material itself didn't have to be particularly creative or exciting - simply presenting a standard task adapted to a football context ensured that the routine task was perceived as having a relevance and a meaning that's so often been lacking in maths lessons. Mathematics teaching is notorious for being totally divorced from anything real, but because sport is of interest to so many it may offer a motivating context for the most prosaic of activities.