What can you say about these shapes? This problem challenges you to create shapes with different areas and perimeters.

Issy, Laura and Anna worked as a team to solve this problem. They found that doing the training track gave them a very good understanding of the problem. On the more complicated track they found the shortest route involved 10 steps. They used a counter and recorded each step by writing the sequence of numbers linked by arrows with the number of moves written above:

They noted that the only point they could not go from corner to corner was on the first row where they had to use 2 moves between the numbers but there were lots of options:

Alex, Jack and Jamie also came up with the shortest route of 10 steps. Peter, Ben and Jack all tried going the longer route and found they could do it in 18, 17 and 16 steps. The shortest route of 16 steps was achieved by moving from corner to corner in all but two cases. This was the first row as described above and the very last column where they had to go 12 to 49 to END.

Mr Bouchard's Class from Richmon Elementary School, USA, sent us a picture of their solution: 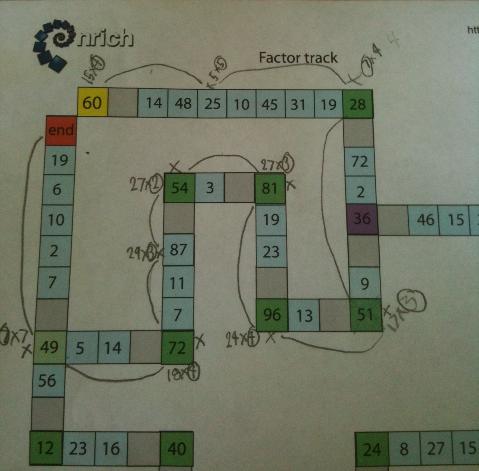 And Krystov's explanation can be found here.

Students from Greenacre School for Girls decided to make their own Factor Tracks. See if you can complete them.

1 by Erica and Helena
2 by Grace and Katie
3 by Rebecca and Elizabeth
4 by Rosie
5 by Sophie, Esme and Josie
6 by Zoe and Rachel