An observer is on top of a lighthouse. How far from the foot of the lighthouse is the horizon that the observer can see?

Are these estimates of physical quantities accurate?

Scientists are studying a genetic disease (which they are calling disorder X) and trying to find out about when it is passed on from parents to children.

One family they are studying consists of two parents, Allan and Beth, who do not show signs of disorder X, and five children. Of the five chldren, three are girls and two are boys. One of the boys and none of the girls has disorder X. This can be represented by the following family tree diagram: 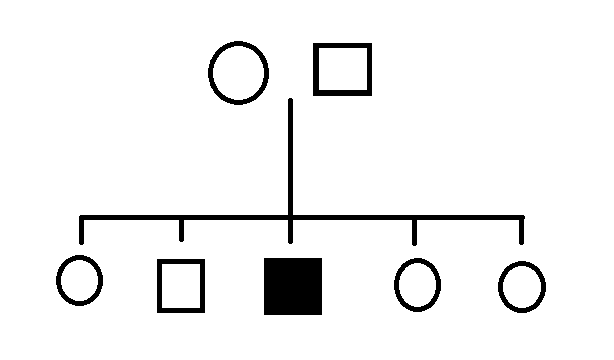 The circles represent females and the squares represent males. A solid shape indicates an individual that has disorder X.

Using the information about this family and given that disorder X is caused by a mutant allele of one gene only, is it possible that the disease-causing allele is dominant? Is it possible that it is recessive?

Some diseases (like haemophilia) are X-linked. This means that they are recessive but carried on the X chromosome. Because males only have one X chromosome, if it has the disease-causing allele on it they will have the genetic disease. Females have two X chromosomes so both of them must contain the disease-causing allele in order for them to develop the disease. If they have one "bad" copy of the gene and one "good" copy, they are said to be "carriers". Why do you think this is? Is it possible that disorder X is transmitted in this way?

Given that disorder X is caused by a recessive allele of a gene that is not on the X chromosome and that Allan and Beth have five children, what is the probability of them having three girls without the disease and two boys, one of whom suffers from disorder X?

Given that disorder X is X-linked and that Allan and Beth have five children, what is the probability that they have three daughters without disorder X and two sons, exactly one of whom has it?

Compare these two probabilities. Which is greater? Does this mean that it is more likely that disorder X is transmitted in this way?

What further information would be helpful if you wanted to find out for certain how disorder X was inherited? Can you think of any experiments that you could suggest to the scientists to help them? If the same disease occured in other animals, such as mice, how might this help you?