The illustration shows the graphs of twelve functions. Three of them have equations y=x^2, x=y^2 and x=-y^2+2. Find the equations of all the other graphs.

$n+10$ and $2n+3$
Luca from St François High School - Troyes in France, Son Charles from Rock High School, Tororo in Uganda and Maria from Colston's Girls' School in the UK all tested different values. This is Maria's work: 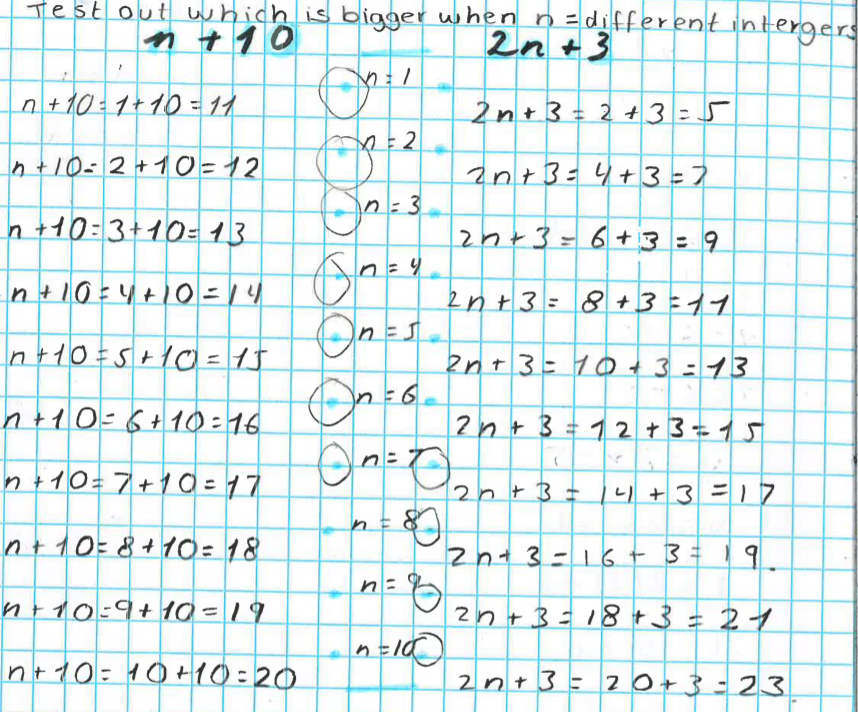 Anh Minh from British Vietnamese International School Hanoi in Vietnam, Ben from Pembury in the UK, Leo from Kings Al Barsha in UAE, Kevin from West Island School in Hong Kong, Justin from Dulwich College Seoul in South Korea, Jonathan from Ashmole Academy in the UK, Ana from UAE, Luca and Maria showed this on a graph. This is Luca's work, using GeoGebra:
Let's create two different functions :
$f(n) = n +10$ ; and $g(n) = 2n +3$, corresponding to the expressions given in the exercise.

Thanks to Geogebra, we can then create the functions' representative curves.
We obtain the following curves 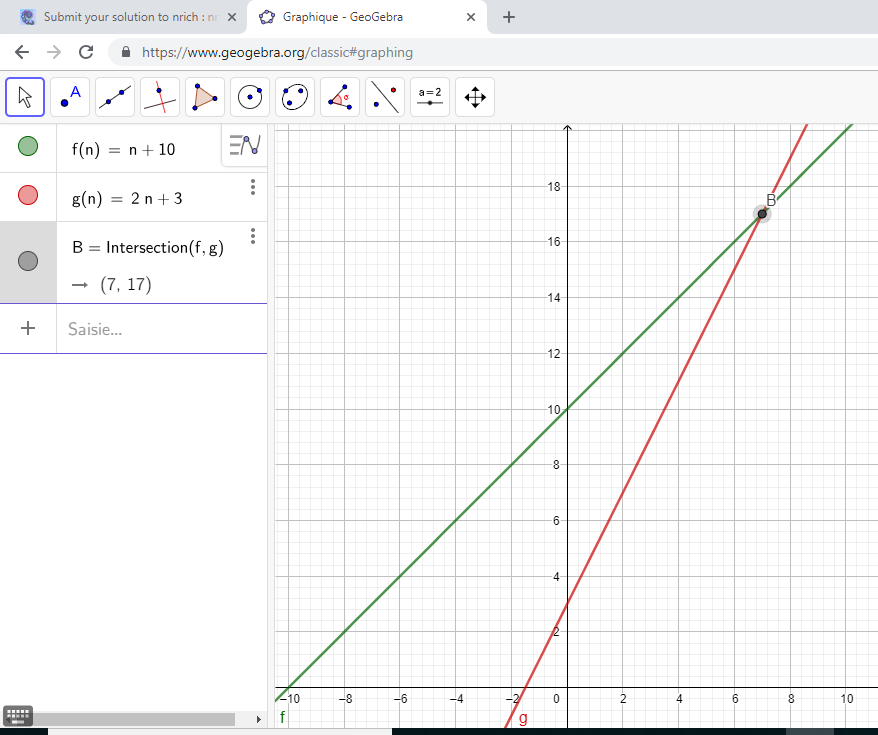 On the picture, the two curves cut [intersect] at B. Its [coordinates] are (7 , 17). This corresponds to what we found in the table. 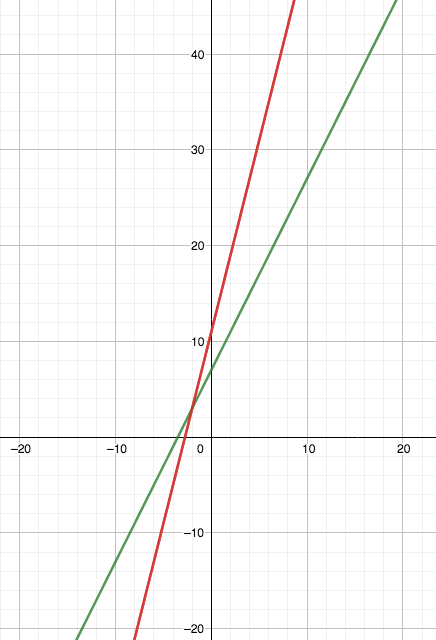 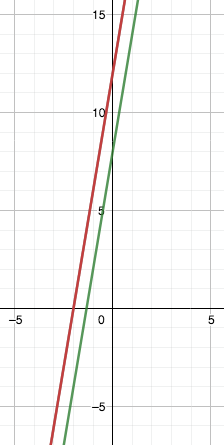 As can be seen on the graph, they are parallel lines because they have the same gradient but different constants. As a result of them being parallel lines, one of them must always be bigger. In this case we can see it is the red line, $3(2n+4).$

Further, if the expressions are rearranged they become $6n+8$ and $6n+12.$ This makes it more obvious that the second expression will always be bigger.

Adithya explained some reasoning which helps to find the expressions:
To find two expressions that satisfy the above constraints, the two expressions must be equal to each other when $n$ takes a value of $5$.
For example, $n+7$ and $2n+2$ would be two feasible expressions.


Find three expressions so that the first is biggest whenever $n\lt0$, the second is biggest whenever $n$ is between $0$ and $4$, and the third is biggest whenever $n\gt4.$
Clara and Nathan substituted in whole numbers to check that their inequalities worked.
Nathan: $10-n$, $n+\frac{17}2$ and $2n+4$
Clara: $-n$, $n+5$ and $2.1n$
I tried to keep the numbers simple as there is no need to overcomplicate things. However I got the $2.1$ because $2$ worked but eventually there would be two numbers that where the same so $2.1$ was the easiest option to change to. I used excel to help me with this as it did all the sums for me really quickly and it was easy to make small iterations.

I multiplied $n$ by a negative a lot because it meant that as $n$ increased, $-n$ decreased making it easy to use when one formula had to be bigger than the other at only a certain point.

Siddhant and Ana used graphs again. This is Ana's work: 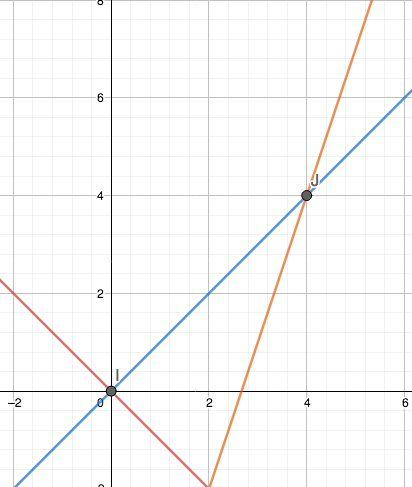 With the graph it is visually demonstrated which value is the largest at any value of $n.$
The equation of the first expression (red) is $-n$
The second expression (blue) is $n$
The third expression (orange) is $3n-8$ 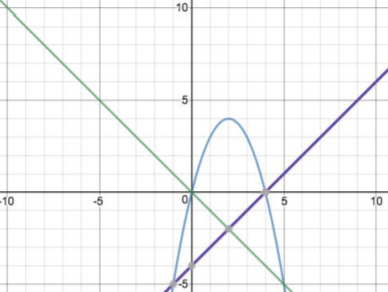 In order to determine an expression which is the biggest when $0\lt n \lt 4$, the expression is set to be equal [when $n$ is equal to] $0$ and $4$. This establishes a quadratic with roots of $n=0$ and $n=4.$ In this case a maximum turning point is requires and so a negative quadratic should be chosen. Therefore, following all the above constraints required for this quadratic expression we establish $-n(n-4)$ which can also be written as $4n-n^2.$


Find three expressions so that the first is biggest whenever $n\lt3$, the second is biggest when $n\gt3,$ and the third is never the biggest.
Clara: $-n+5$, $n$ and $n-100$
Adithya and Justin used graphical solutions. Adithya used parallel lines: 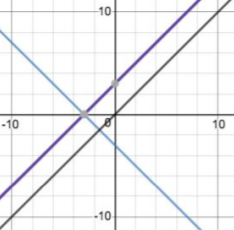 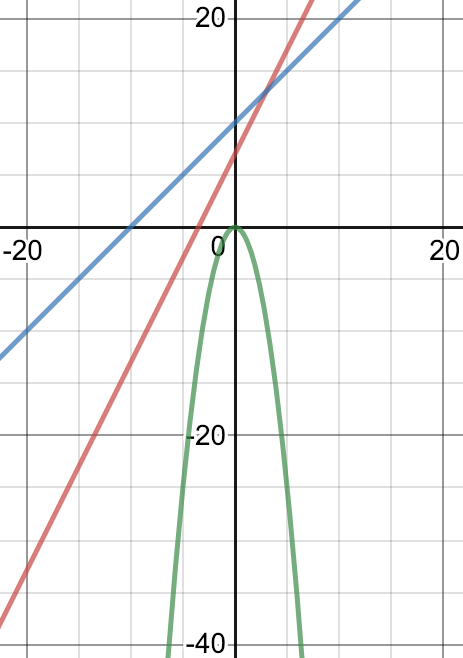 A quadratic graph with a negative coefficient would satisfy the requirement of never being the biggest, as both ends would curve downward. If the quadratic graph is the biggest at one point, we could decrease the constant or move it left/right across the x-axis. In this case, none of this necessary. The graph of $-n^2$ is in green:

Find three expressions so that one of them is the biggest regardless of the value of $n.$

Find three expressions so that one of them is the biggest regardless of the value of $n.$
Again, Clara found three which work for whole numbers:
$n^2+5$, $n+4$ and $n+5$
$n^2$ was really useful because it meant that if $n$ was negative $n^2$ would make it positive.

Adithya, Ana and Justin all used parallel lines. This is Justin's work:
If three lines in a plane are parallel, they will not intersect - the biggest will not change. Lines that are parallel have the same slope. Then, the expression with the highest constant will be biggest. 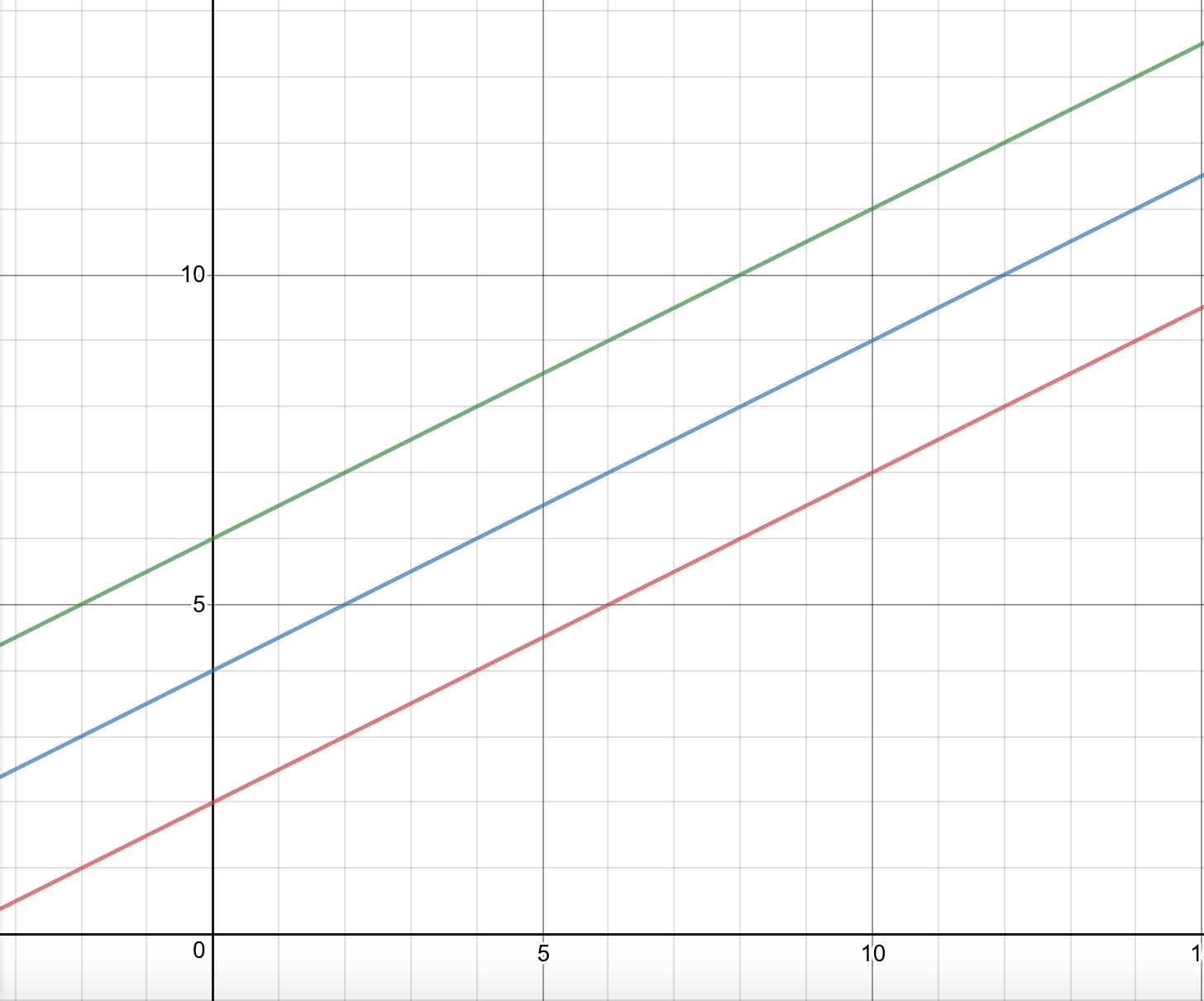