You can read more about the solution to this problem on the Plus website.

Mark Yao from the British School of Manila correctly reasoned his way through this problem using tree diagrams and conditional probability; his results were similar to that obtained using the systematic enumeration shown below.

Note that Turing CANNOT lose if a Head emerges next (This would be the same if the game continued indefinitely) and will win 31 out of 32 times if a Head emerges first; a draw will occur if six Heads emerge. Moreover, Turing will win on at least two occasions if Tails emerges first. So, Turing is more likely to win than me. The following image will help you to see this: 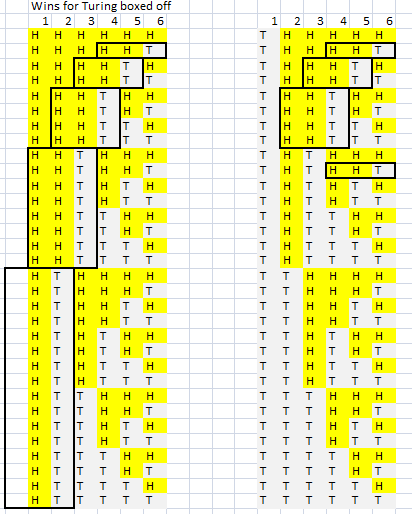 We need to beat THT to a win, so it makes sense to see when THT would occur. Using the systematic enumeration from the previous question we can see that THT emerges first in the following places 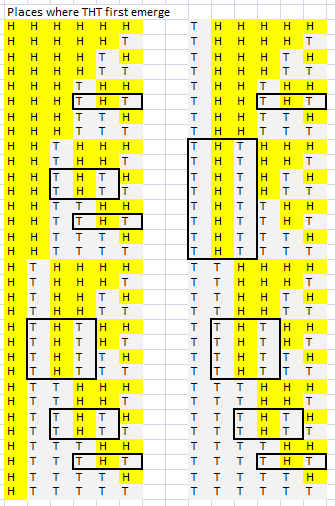 It is quite easy to see that HHT will win over THT from this list; exact probabilities could be computed by counting.

Suppose that I choose TTT. Then, consider the first time TT has emerged. Neither Turing nor I will have won prior to this point, and the game will certainly be over after the next square. We will each win with 50% probability.

Suppose I do not choose TTT. If Turing chooses TTH then he will win for certain if the first two squares are TT. There is nothing I can do about this! Suppose therefore that a H emerges before TT. Turing will need TT to start his sequence; so if my sequence is (H)(TT) then my sequence will end at the same time Turing's starts. Thus, I am guaranteed a win if a H emerges before TT. Since the chance of TT on the first two turns is exactly 1 in 4, I can guarantee a win by choosing HTT 3/4 of the time.


Lewis from The Greneway School sent in these thoughts on the infinite parts of the problem, along with a version that can be played with cards:


A HTT and HHT is in favour of the second player with odds of 2 to 1. Although, this is one of the four strongest first player choices, the odds still go in the 2nd player's favour. The weakest hand for player 1 to choose would be HHH or TTT. Player 2 needs to put the opposite letter in the first position (THH or HTT) to have 7 to 1 odds of winning. A variation of this game can be played with playing cards. Interestingly, if Player 1 chooses BBB and Player 2 chooses RBB (using the "other letter" rule mentioned above), there are odds of 99.49% of a win for Player 2, just 0.11% for Player 1 and 0.40% for a draw. The best odds player 1 can get on the cards variation is 11.61% or 1.99 to 1 in favour of Player 2. Player 2's process is to move the first 2 of Player 1's selection to the very right and add the opposite letter of the 2nd of the 2 moved to the left. The main weakness of choosing HHH is if tails is tossed once, Player 1 cannot win. This explains why the odds are stacked in favour of Player 2