Three children are going to buy some plants for their birthdays. They will plant them within circular paths. How could they do this?

Have a go at this well-known challenge. Can you swap the frogs and toads in as few slides and jumps as possible?

How many models can you find which obey these rules? 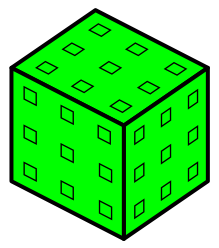 Here is a cube with nine small square patches on each of the six faces.
Some of the patches on each face are covered in ink.
All the faces are different.
The cube is placed on paper and makes a mark like this;

It is rolled over by tipping it very carefully (with no sliding) along one of the edges so that the next inky mark is right by its side. This gives;

It can roll both left and right and up and down.

When it has done several rolls, without taking it off, the paper looks like this; 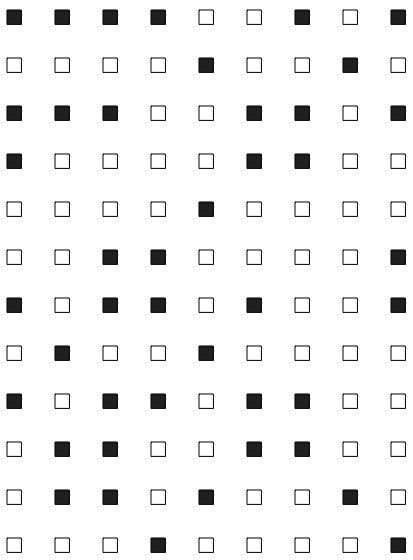 Your challenge is to find out:

Next, you might like to try this colour version where you have to find the colours for each patch on each of the faces of the cube, as well as the route it took. 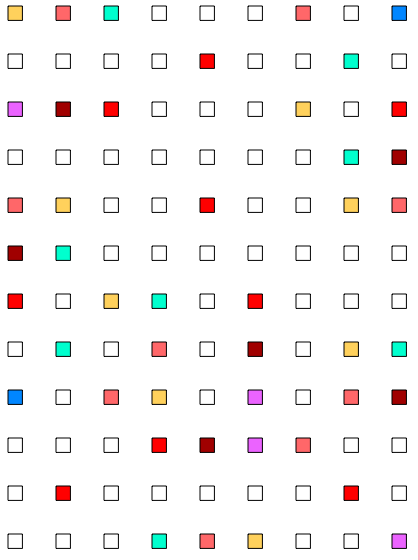 Here is a printable version of the marks left by this coloured cube.

This investigation is a serious challenge and has been written with high-attaining children in mind.  It was inspired by Peg Rotation.   There are lots of possibilities to test, which means that learners will need to work systematically.  It gives pupils an opportunity to share and discuss ways they approached the first part of the problem, which can then be applied to the coloured version of the cube.

It would be helpful to have a large dice to use to introduce the activity.  Have something like the following chart drawn on the board, preferably so that each square is just a bit bigger than the face of the large dice: 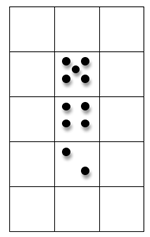 Explain to the group that you are going to take your large dice for a 'walk' on the board. Place the dice so that the number $5$ is touching the drawn $5$ on the grid. (This will mean that the face 'showing' will be the $2$.) Roll the dice one box down the board so that now the $4$ is covered and is touching the board where it is drawn on the grid. Roll it again down one more box so that this time, the 2 is touching the board on the drawn $2$. Ask the children to predict what number will appear in the next box down [$3$]. What will the number be in the bottom right box? [$6$] From the $6$, can they work out what the very top right box would be? [$6$ again] Can they explain why this happened?
You can now introduce the problem itself, showing the image of the cube and the marks it has left once it has been rolled (make sure children understand that this is not a conventional dice!).  Emphasise the fact that the six faces are all different and that the cube has not been lifted off the paper.   You may also like to tell the children that perhaps not all the faces have left a mark.  Invite children to work in pairs or small groups on the activity and give them a copy of this sheet which shows the marks left by the cube.
After a while, bring everyone together to discuss progress and to share methods.  Some learners will have noticed that where there are identical faces immediately next to each other on the sheet of markings, the cube cannot have travelled in that direction.  Some children might be randomly testing different routes, others may have developed a system so that they know they don't miss out any possibilities.  Other learners will notice that they can quickly rule out some routes because having gone so far, they end up not being able to cover the whole 'grid'.  Some pupils will want to construct a cube and put markings on it to test their routes, others might want to use stickers on dice.
Allow more time for them to work on the problem and then come together again to discuss the solution.  The aim of this part of the lesson is not just to check the 'answer' but to talk about what methods worked well.  Allow time for reflection on the methods that the children found most helpful, for whatever reason.  The idea then is to give them the coloured cube problem so that they can apply these methods to a new challenge.
You could ask them to create a poster summarising how they went about approaching this second part of the investigation.

To some extent, the second part of this challenge will provide the extension.  However, you could ask children to create a route themselves for a partner to solve.

It would be useful to have blank dice and stickers available so children could test their ideas.  Nets of cubes might also be worth having ready-made.