Take a pack of cards and remove the Jacks, Queens and Kings.
Shuffle the remaining cards, and then lay the whole pack face up on the table in a snake, like this one: 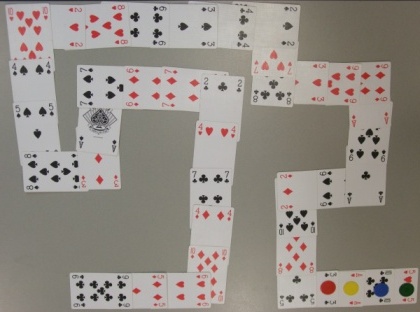 Place four different coloured counters on the first four cards in the snake. Then move each counter foward the number shown on its card (Aces count as $1$). Keep moving each counter until it can't go any further without going off the end.

Watch the video below to see a demonstration:

Challenge
Find a way to arrange the cards so that all four counters finish on different cards.
Can you do the same with five counters?

This problem is based on a card trick called Kruskal's Count