A kite shaped lawn consists of an equilateral triangle ABC of side 130 feet and an isosceles triangle BCD in which BD and CD are of length 169 feet. A gardener has a motor mower which cuts strips of grass exactly one foot wide and wishes to cut the entire lawn in parallel strips. What is the minimum number of strips the gardener must mow?

What can you say about the lengths of the sides of a quadrilateral whose vertices are on a unit circle?

We had two very clear solutions to this problem - well done to James, from Poole Grammar School, and Dylan, who did not give his school. James's solution is shown here. 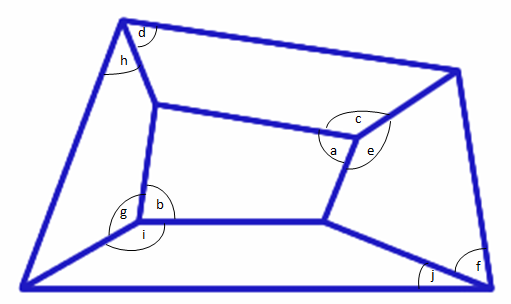 All five of the small quadrilaterals in the above shape are cyclic, and by using the fact that opposite angles in a cyclic quadrilateral add up to $180 ^{\circ}$ we can prove that the large quadrilateral made up of the five smaller ones is also cyclic.