This cube has ink on each face which leaves marks on paper as it is rolled. Can you work out what is on each face and the route it has taken?

The Car That Passes

What statements can you make about the car that passes the school gates at 11am on Monday? How will you come up with statements and test your ideas?

From Year $4$ at Queen Edith School, Cambridge we had the following rather good idea sent in. 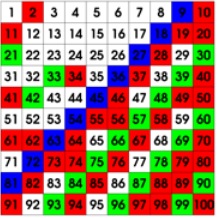 Finally, we made a display using the 100 square and some of our work to challenge other children to predict the journeys for some of the squares we had not coloured.
Can you predict a journey and then check if you were right?

From Krystof in  Prague and  Matthew from Hamworthy Middle School we had had similar results.  From Karin in West Acton in London we had a clever further idea sent in.

Well done Karin, I like this very much, others of you could try your own rules.